OK, this really doesn’t fall into the traditional, mainstream “pliers-scissors-screwdriver” multi-tool category but it’s still a neat multi-tool so I thought I’d share it with you guys. It shows us that multi-tools can be of all shapes and sizes.

My father was a BIG tobacco smoker back in the 1970’s and 80’s. According to him, he would smoke cigarettes in the morning, a cigar for lunch and a pipe in the evening. He quit smoking in the late 1980’s and about 10 years ago, gave me an assortment of cigarette lighters, cigar cutters and pipe tools. I never really looked at them and always kept them in a cigar box but this past month, I rummaged through the box to see what I had. When I saw this neat little item, the first thing I thought was “cool, it’s like a mini multi-tool.” 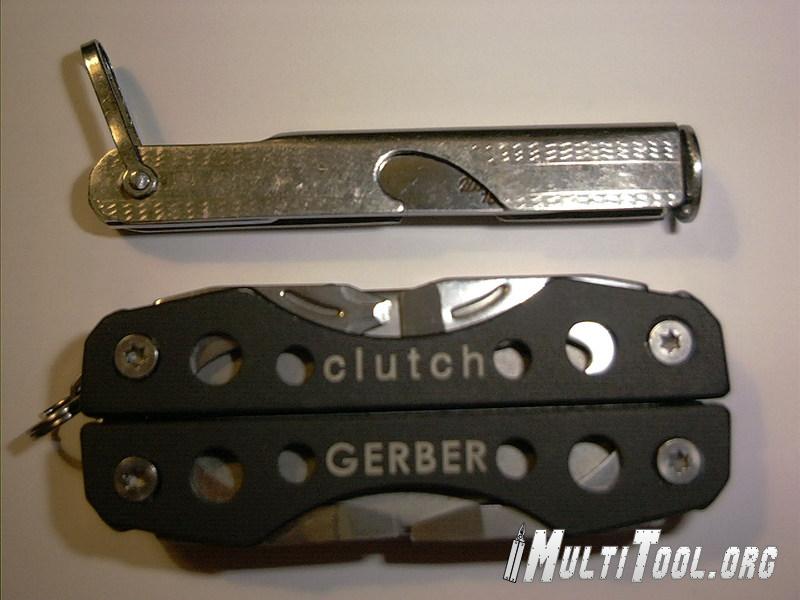 Made by Italian tool maker “R&H” (as stamped on the blade but I don’t know the full name of the company), this stainless steel, pipe smoker’s multi-tool measures 2 1/3 inches long closed and 4 ½ inches open. Two of these side-by-side would be about the same size as a Gerber Clutch. (see above picture) 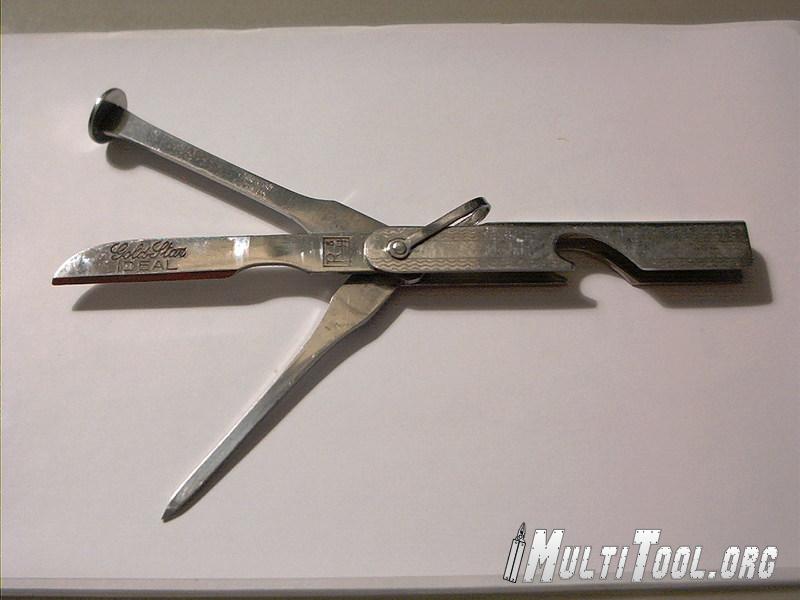 Simple in both form and function, this tool only features four tools: a plain-edge sheepsfoot blade, a curved tamper head, a tapered spike and a church key bottle opener. While more tools would’ve been better, these are the only tools a pipe smoker really needs so the tool manages to maintain a nice compact size by sticking to the bare essentials.

Functionality is really simple. For pipe smokers, the blade allows you to cut open tobacco pouches and chop up tobacco while the tamper packs the tobacco into the pipe chamber. The edge of the knife is fairly small (only 1 inch long) but I still find that it can easily cut open boxes, packages, envelopes and twine like a hot knife through butter. After 30 years, it still holds a razor sharp edge. 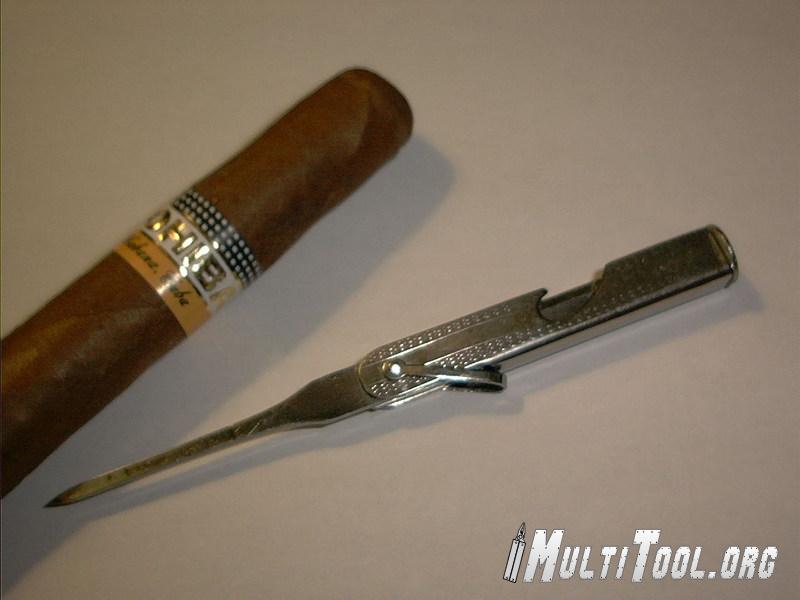 The spike is my favourite feature on this tool. Pipe smokers would normally use this to stir the pipe chamber (bowl) or pick and scrape out the ash but as a cigar smoker, I find this spike incredibly handy at clearing plugged cigars. Simply insert the spike into either the head or foot of a plugged cigar, rotate it a few times and you have a much-improved draw from your cigar. Of course, it can also function as a regular awl for making holes in a belt, loosening tight knots, ice-pick, lock pick, etc. Heck, it can even been used as a deadly last resort self-defence weapon! 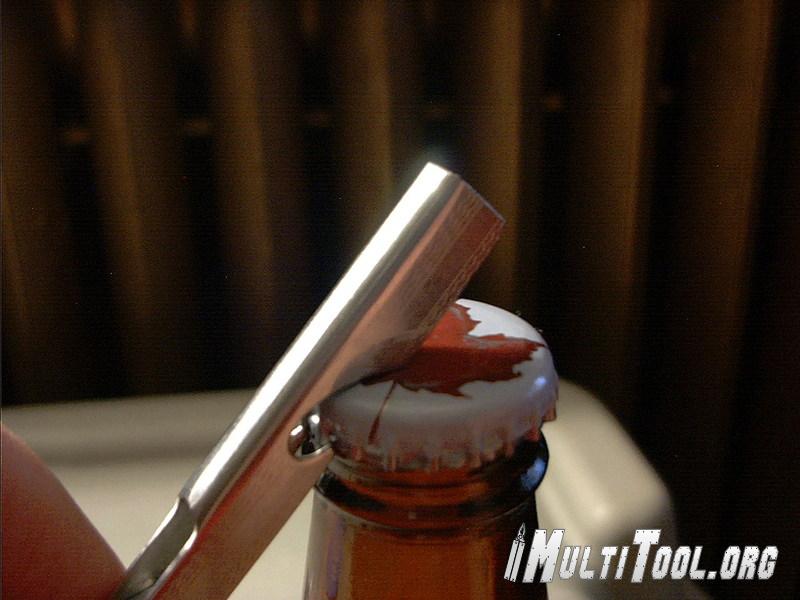 For such a small tool, the double church key bottle opener is also remarkably efficient at effortlessly prying off bottle caps. (Double the bite, double the power!) The metal loop can not only lock the tools in place but also serves as a key ring to attach a small flashlight or set of keys. Pushing the metal loop down will lock the tools in place in either the open or closed position. 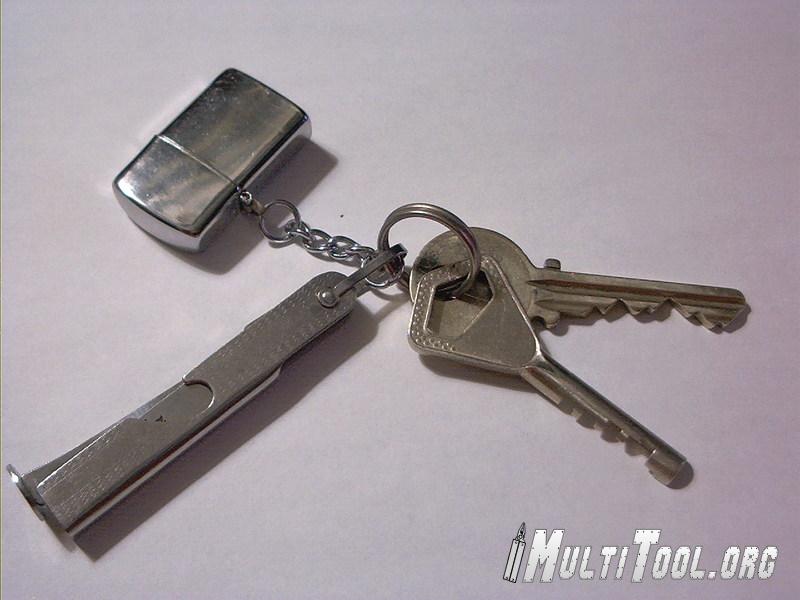 This particular multi-tool is vintage but cigar stores and tobacconists still carry similar tools for less than $10. A similar version is made by Rodgers of Sheffield, UK.

If you’re a pipe smoker or a cigar smoker, this tool is a must have. If you’re a multi-tool or gadget fanatic, you might also appreciate this tool.

More in this category: « Lowes Kobalt Multitool Review Swiss-Tech Screwzall Review »
back to top
Interested in this or a different tool and still have more questions?
Why not join us over on the Multitool.org Forum where our community can help you find what you're looking for!