How useful a review of a discontinued Leatherman pocket multitool might be? Well it depends. The Leatherman Juice Pro has very subtle differences from the Juice's line flagship, the Xe6. Essentially it just adds two hidden small tools, a pair of tweezers and a small curved blade with mini serrations, known as a foil cutter. Thus, a potential buyer of the Xe6 might find this review helpful. 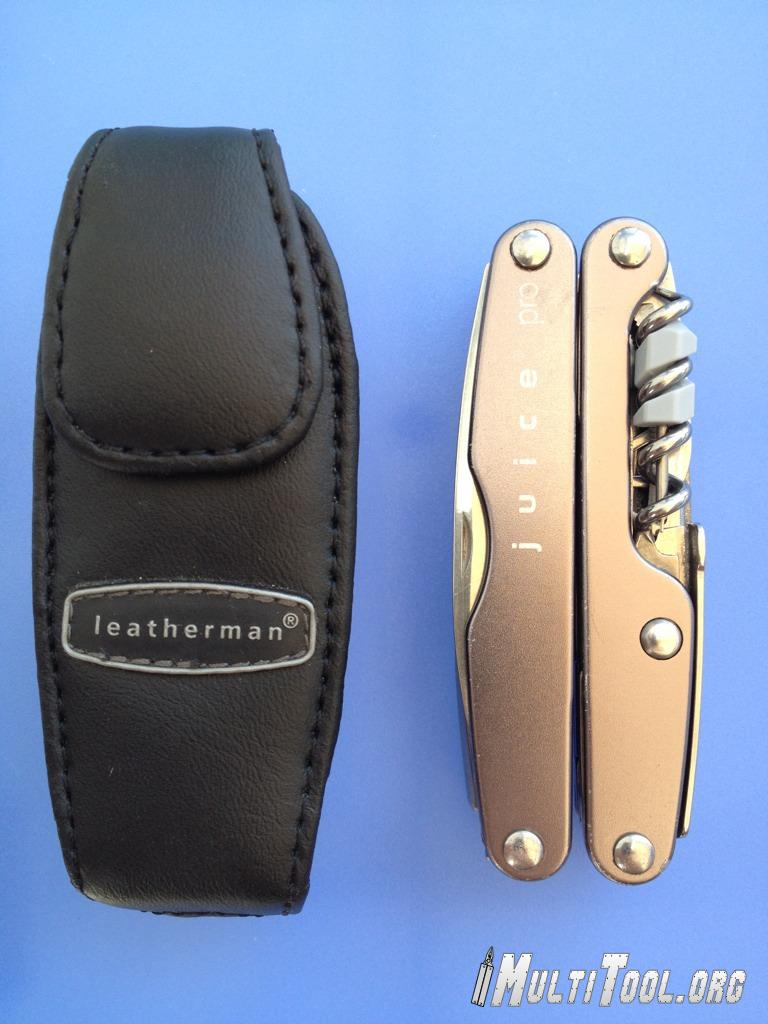 The Juice Pro is a sweet little pocket multitool, loaded with 15 tools and 23 functions. It can be hidden inside the palm of your hand and carried with the help of it's genuine Leatherman pouch, with the help of a nice clip, or inside your jacket's pocket. Mind though that it is somewhat on the fat side and a full 190gr if weight. While it weights almost as much as the venerable Victorinox Swisschamp, it is considerably smaller, measuring 82x30x20 cm (24 measuring the corckscrew protrusion). One could choose between  "Storm" Gray and "Thunder" Purple aluminium scales colors and I find the grey very interesting, looking natural as a shade of the stainless steel the tool is made of. There are no ribs or wafers on the scales, but the closed tools provide enough friction for a sweating hand. The color is scratched off with use but not that much. 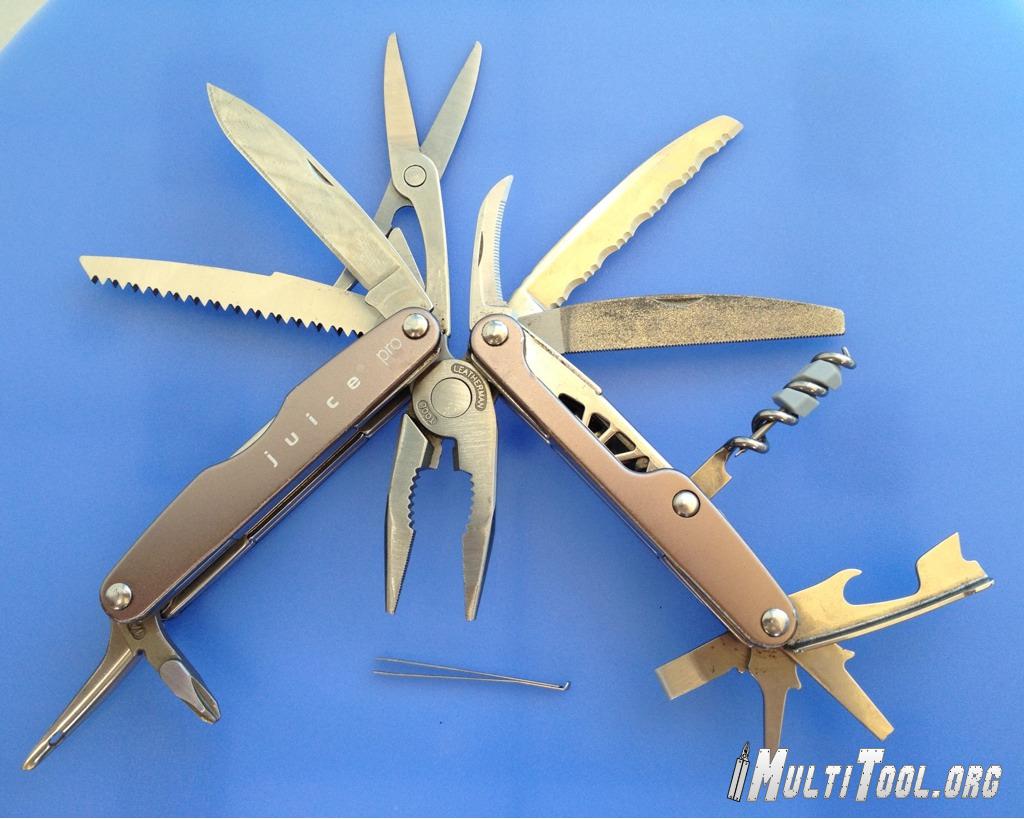 Let's count the available tools now. All of them are non locking and spring loaded, just as the similar on the archetype SAKs. The springs are strong and the tools click positively while opened, less so while closed.

4. Hard-wire Cutters
We get a combo pliers, somewhat more inclined on the needle form and two wire cutting places. While it is small compared to the one the full size tool have, it all around better and more capable than the one Swiss Army Knives use. You can cut hard wire and tighten a bolt with it, but it shines as a light duty tool, for jewelry fabrication and hobbyist use. Butterfly opening.

5. 420HC Knife, drop point, 57mm length of cutting edge. It is smaller than the one 84-93mm SAKs have and with less belly. You won't cut your steak with it but it can be used for the aforementioned hobbyist tasks and it is complemented by a

6. 420HC Serrated Knife of 57mm cutting edge, most SAKs don't have. This cuts plastic and rope with ease and for me it is the main blade, because the plain edge leaves me unimpressed. Some jimping at the base of the serrated blade helps identify the two, with eyes wide open and shut. Nice! For further cutting we have a pair of

7. Scissors. They are bigger than many full size Multitool's scissors, with a special area of fine serrations near the tip and a strong fulcrum spring. Great for hobbyist use again, but inferior to the Swiss sharp as katanas scissors for manicure, hair trimming and thin thread cutting on the fly. Cut paper and fishing line as much as you please. For harder materials you might use the

8. Saw, with the double shark teeth Swiss factories standardized and great for wood and plastic. One should first open the awl to clear the way and then the scissors in order to access the nailnick, but I don't mind, since I use it on rare occasions, during which it is irreplaceable though. There is also the 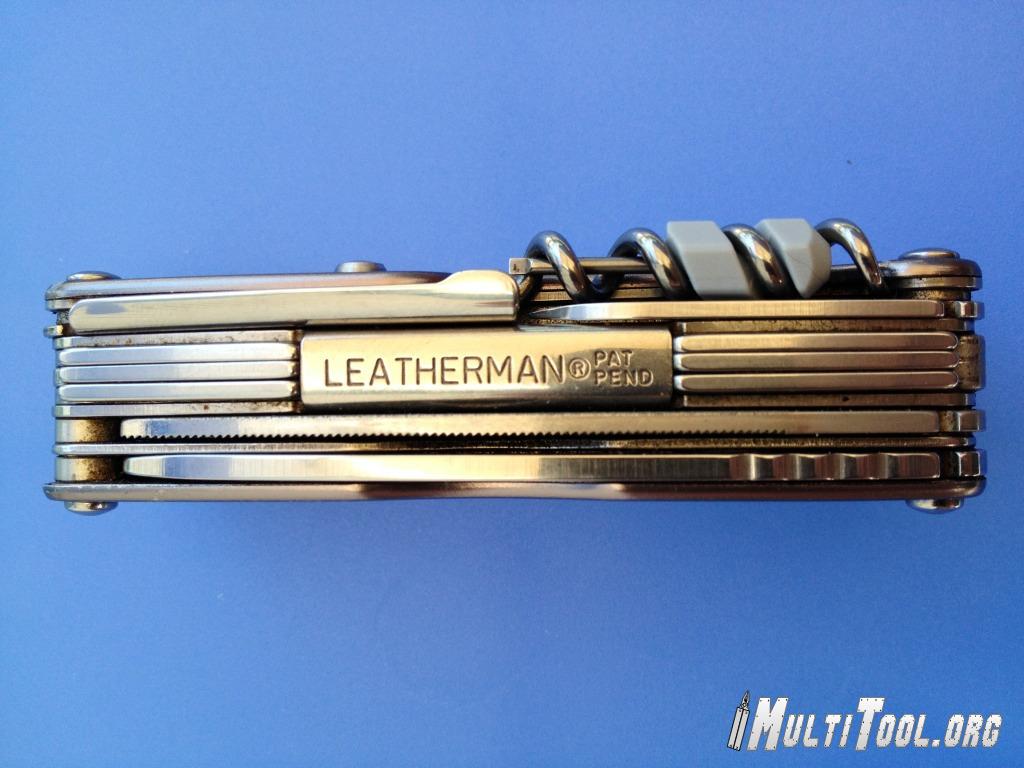 11. Wood/Metal File, easily accessible this time. The saw part was proven worse than the Swiss protypes, but the files shine and the diamond coated one is great for manicure to knife sharpening. If only it had a nail cleaner! Then we have a

12. Bottle Opener that works but it is counted also as a

13. Can Opener which isn't, since it barely opens cans. Other than a can opener wannabe it is an

15. Corkscrew that really works and can handle a patented Victorinox mini screwdriver (the cylindrical I had fits loosely but the hexagonal perfectly). Under the corckscrew there is a nice little

16. Foil cutter blade, hawkbill like and with fine serrations, for cutting the metal foil that is wrapped around some wine corcks which might dull your other blades. Use it at will for other tasks also. Then there is an

18. Sewing thread, inspired perhaps from the Swiss 93mm awl but not even remotely as sharp. It is easily sharpened though and then it shines. The last outside accessible tool is the

19. Tweezers. They are a Wenger like capable pair.
On the inside we find a

20. Phillips Screwdriver, 3 dimensional, 1-2 size, capable of using an adapter for all Leatherman and 6mm Hex bits, and on the opposite handle three more side by side drivers, an

21. Extra-small Screwdriver of 2mm, a

22. Small Screwdriver of 3mm and a

23. Medium/Large Screwdriver of 6mm. All sharp and nice, exploiting the empty space under the pliers head in closed position, but one wonders what other tools might fit there if Leatherman used the Swiss practice of endowing other tools with driver heads (as in the famous openers layer). Anyway. Beside the Philips driver there is a nice 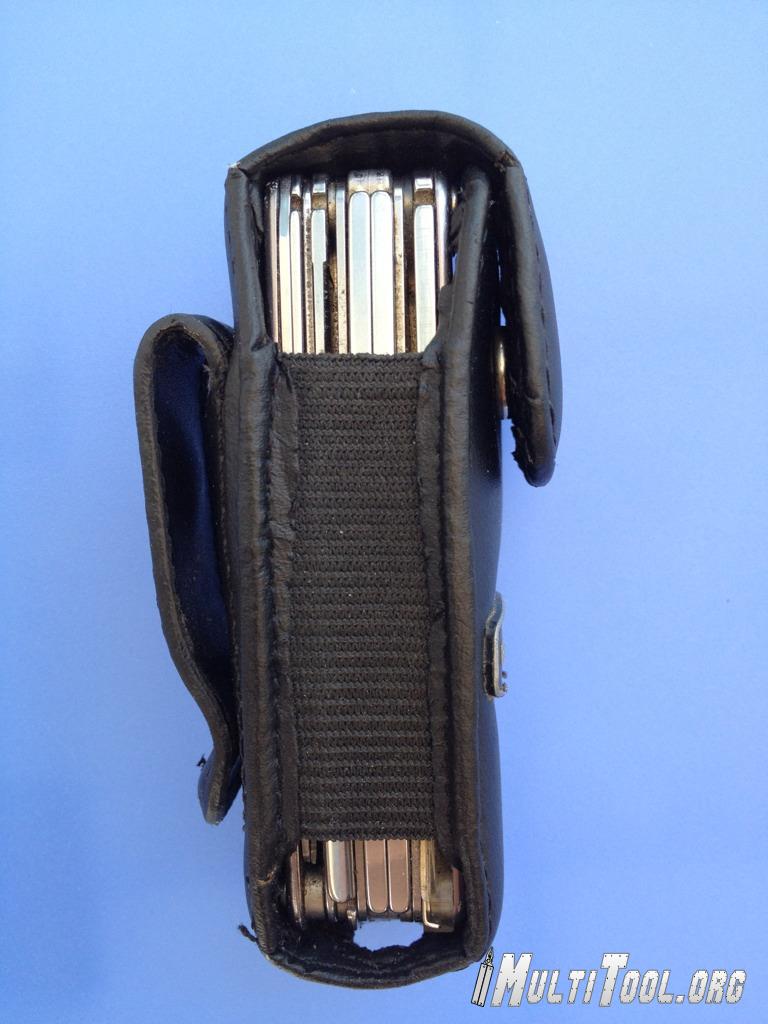 24. Lanyard Ring that can be hidden or taken out and used at various degrees angle from the handles.
The final verdict: Leatherman Juice Pro is a very nice and capable multitool, that could be competitive against the Swiss Army Knives of 5-8 layers, if only the cost was in the same league (for Europeans generally it isn't) and some tools would be improved to reach the Swiss prediction standards. It is a great knife for EDC and for the hobbyist (model making, fishing, origami, jewel making etc) and with some improvements it would make a great personal care tool too. For other tasks it could supplement a larger fixed blade or folder or a full size tool that lacks certain blades, such as scissors or an awl. And it is legal during most occasions and in most countries, in contrast with other blades and bigger, locking tools.

More in this category: « Leatherman Style PS Review Leatherman Rebar Review »
back to top
Interested in this or a different tool and still have more questions?
Why not join us over on the Multitool.org Forum where our community can help you find what you're looking for!