The Surge caught my eye while perusing EDCDepot and I decided to give it a shot. I like the Wave type styling that seems to be very prevalent in the current offerings from Leatherman, so I decided to see what it was like in person. I also wanted to see how it differed from the Wave, one of my favorite models 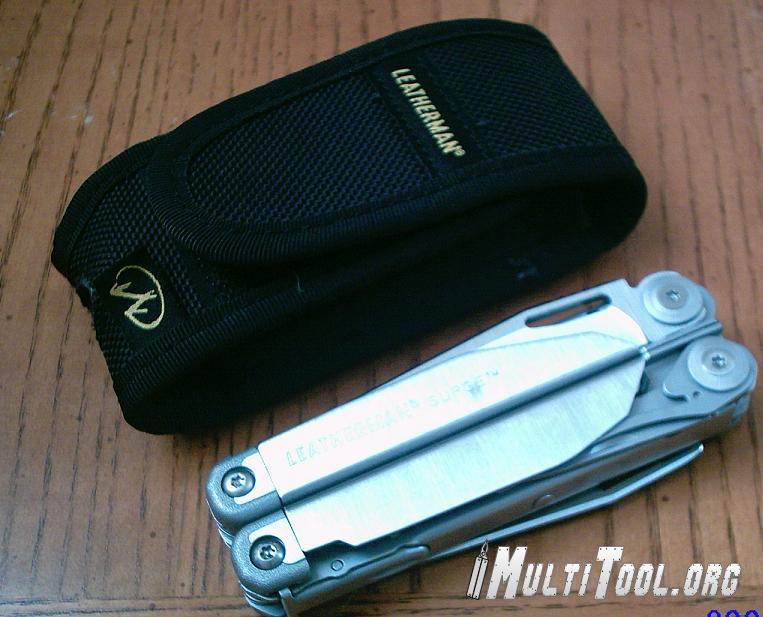 When the Surge arrived I was wondering why they packaged it in such a huge box. I opened the box and realized something that hadn’t hit me before. This tool is HUGE! I had been under the impression that it was a Wave with a different array of tools, but I hadn’t realized that it was also a serious heavyweight. And I do mean heavy! This thing outweighs the SwissTool and the PowerLock by a significant amount. In fact, I am currently checking to see if it affects my gas mileage! 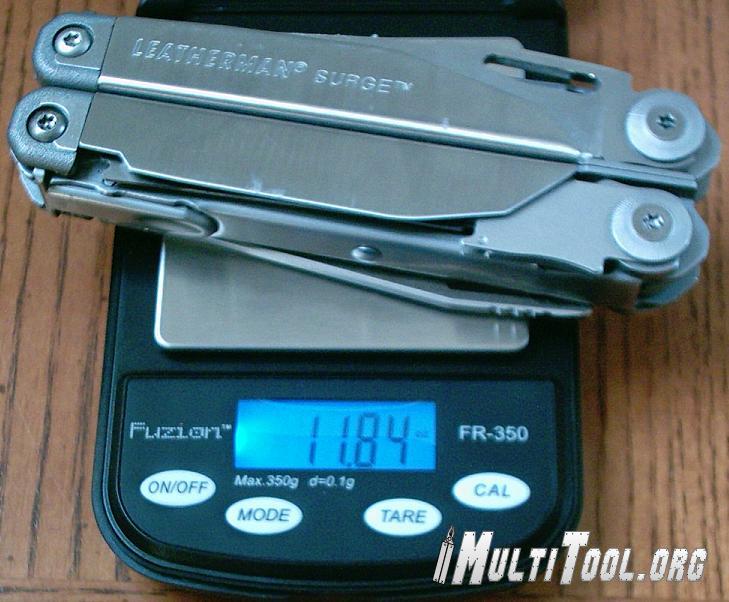 Did I mention that the Surge is big?

Seriously, it’s a big tool, and that’s a good thing. The blades, the saws and everything else on this tool are also quite large and that’s what makes it worth the extra weight. Folks who regularly pay attention to my ramblings will know that I am a fan of large saws so my appreciation of this one should come as no surprise. They also went one step further and included a sizeable diamond file/ metal saw. If you know that I like big saws, then you also know that I love Leatherman’s diamond file. The interesting thing about the Surge is that the file and the wood saw are interchangeable. There is a spare pocket in the sheath to carry the unused tool but I think I would prefer them both to be permanently mounted.

The reason they are interchangeable rather than both being permanent is so that Leatherman could include a serious set of scissors, readily available on the outside. I like the idea of the scissors on the outside, and these are (you guessed it!) pretty robust as well. I do like the scissors, but the lock on them is a little strange. You have to open them, then you have to open the scissors in order for the lock to engage. Not a big thing, but something to take note of.

The Surge also includes a can opener, awl with sewing needle and a flathead screwdriver. Two double ended screwdrivers are also included, and this is where things get interesting. One is a “regular” phillips and flathead- I use the term regular instead of standard, because these are not standard hex bits, but the regular double ended bits found on numerous Leatherman products these days- and the other is a really interesting on a tool this size, a double ended eyeglass screwdriver. A precision screwdriver on a tool like this kind of reminds me of an incident I once saw in which a couple of guys (well lubricated of course) tried to open a beer can with a backhoe. Of course, two days ago I not only repaired my sunglasses in the car with the Surge, but was also glad for the comfortable handle that allowed me a certain amount of torque that was easily controlled. All in all, significantly more successful than the guys with the beer can! It’s amazing that it works so well, and makes me wonder how the design team at Leatherman managed to come up with it! 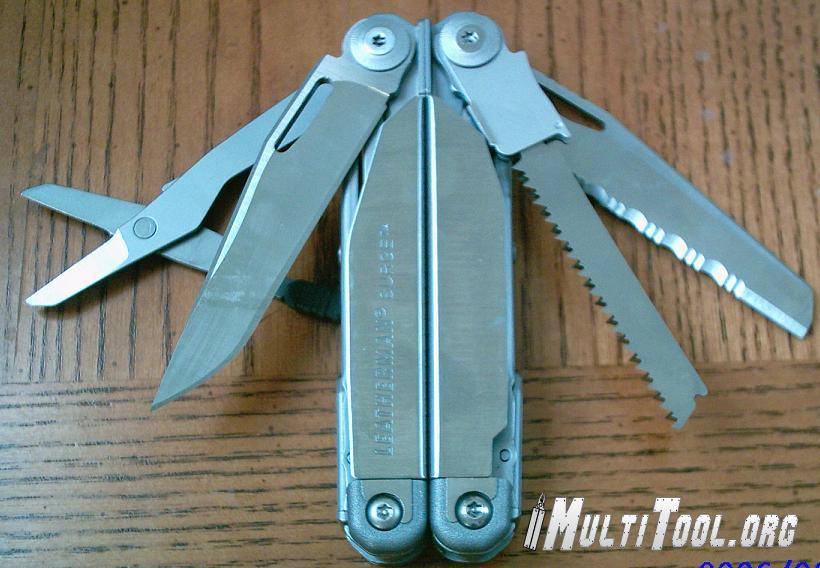 Downsides on the Surge are few but worth mentioning. There is the size and weight issue, which may or may not be a big concern to the individual user, but that isn’t the only problem. The Surge rattles. This is a bit of a turn off for me as I like a tool to be “tight” and feel like a precision instrument. The Surge doesn’t feel like that. It rattles and sounds like a Gerber. I am certain that it is quite solid, and in fact it hasn’t given me cause to feel otherwise, but it is noticeable, and if this bothers you then this might not be the tool for you. The other issue I found with it was that the ruler is engraved on the inside of the tool- ie where you can’t access it easily, and the plier head would get in the way if you try to measure anything over 4 inches. 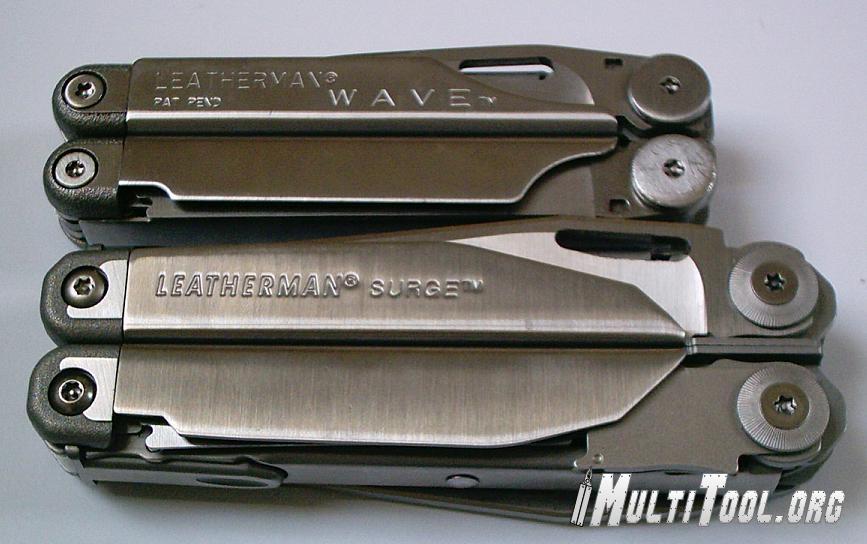 Other than that, the Surge follows the Wave’s design pretty well, with the one handed opening plain and serrated blades. The liner locks snap confidently into place and the pliers are everything you have come to expect from Leatherman. I wouldn’t hesitate to recommend this tool to any heavy user or large handed individual, although this one is definitely on the avoid list for someone who need a light use, handy or occasional use tool. This is a serious tool for serious users. 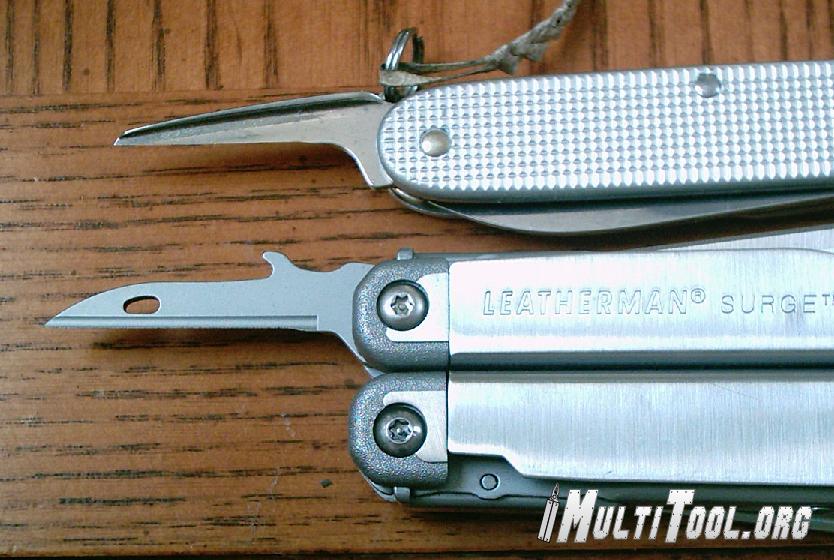 More in this category: « Leatherman PST II Review Leatherman Wave 2004 Review »
back to top
Interested in this or a different tool and still have more questions?
Why not join us over on the Multitool.org Forum where our community can help you find what you're looking for!