Leatherman has never backed down from a challenge, and the Style is a fairly obvious attempt at recreating the infamous Victorinox Classic. The Classic is the most successful Swiss Army Knife in the history of Swiss Army Knives- so how does the Style stack up? 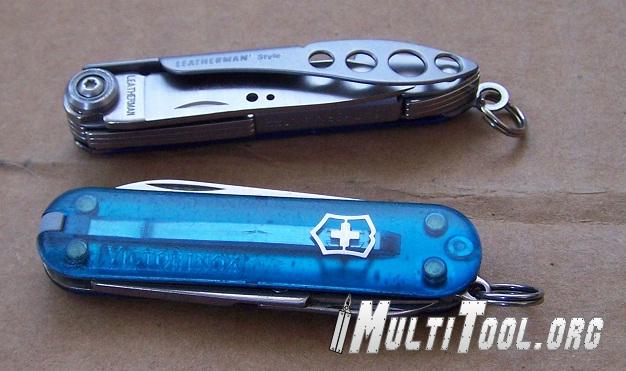 Introduced as the smallest version of the Style series which includes plier and scissor based models, the Style is essentially one half of the other models. It features a small blade, nail file with screwdriver tip, scissors and tweezers, all packed in one of four different colors- blue, black red and pink, although the color is only on one side.

The blade is the typical blade found on any of Leatherman’s other keychain tools, from the Micra to the Squirt series to the Style series. It’s a good little blade that takes a nice edge and is sturdy enough for most jobs. To make it seem special on the Style series Leatherman drilled a couple of holes in it, but otherwise there’s nothing new here.

Scissors are a must have item for me on a multitool, especially on a keychain size tool. These scissors are ok- not great but not bad. Much like the blade they are acceptable but not exceptional. They get the job done well enough, but there’s nothing about them that stands out.

When it comes to the nail file I take things seriously. I use a nail file a lot, and I hate having crud under my nails. That may make me sound like a sissy, but given how many tools have nail files these days I imagine I can’t be the only one. This nail file has a decent file surface, although it is a bit slim. I have used better files, and I have used worse ones, making this one very middle of the road. Leatherman decided to add function by clipping off the end of the nail file so that it can act as an eyeglass screwdriver- a feature that I personally don’t care for. Admittedly I don’t wear glasses, but I am often called upon to fix my wife’s glasses fairly often and I can appreciate the need for an eyeglass screwdriver, but to me, if you are going to make a nail file, leave a point on it so that I can clean under my nails. Admittedly I could use the knife blade to do that, but it’s not properly shaped for that, and I find the blade tends to catch on the underside of the nail. 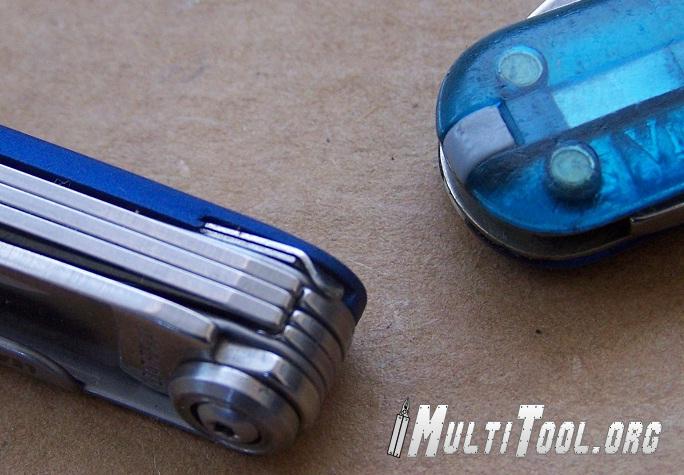 Lastly they tucked a set of tweezers into this tool, and like everything else they are good enough but nothing exceptional. Unlike the Swiss Army style tweezers, these are angled at the tip, giving them a bit of a precision point to pick slivers or errant hairs. 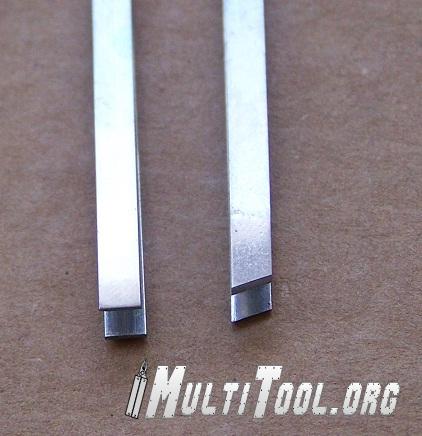 All in all there really isn’t anything wrong with this tool, but there’s really not a lot right with it either. It is a very indifferent tool- it’s functional but there’s really nothing to make it stand out, except possibly the colors, but even that is only on one side of the tool, leading one to wonder why they bothered. It makes a good gift, keychain or purse tool, but I’d be hard pressed to pick this one over the more common Victorinox Classic or Wenger Esquire. It will do the jobs it’s designed for but the tool overall leaves me unimpressed- there’s just nothing about this tool that stands out for me. If you find one for a good price pick it up, but I wouldn’t go out of my way to find one.

More in this category: « Leatherman Style CS Review Leatherman Style PS Review »
back to top
Interested in this or a different tool and still have more questions?
Why not join us over on the Multitool.org Forum where our community can help you find what you're looking for!