Plier based multitool fans should probably look away now- Gerber’s Fit multitool will probably not appeal to you at all. It is however likely to appeal to the masses of folks at big box type stores because of it’s functionality, reasonable cost and stylish aesthetics. Available in blue or orange it catches your attention the way few multitools have in the past. But, here at Multitool.org, pretty is as pretty does, so let’s get down to the nuts and bolts of this one. 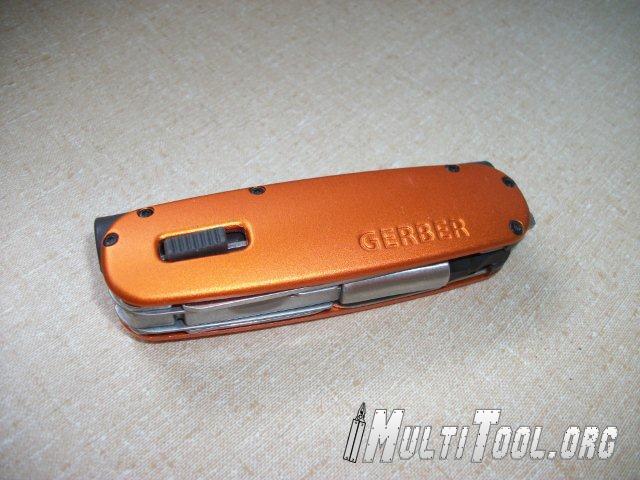 For me at least, it reminds me of a retro type locomotive, especially since the headlight of the locomotive is in fact an LED flashlight, which pretty well dominates the spine of the Fit. It’s a little larger than many multitool flashlights (a concept I am personally not fond of, but Gerber did this one as right as it could be done) but that’s largely due to the fact that this light is powered by a AAA battery. I prefer this, as the teeny watch cells found on many lights are almost impossible to replace in an emergency or small town, while AAA batteries are usually pretty common. The light itself is pretty bright- I have no idea how many lumens it is, but it is what I call “functionally bright” which means it’s bright enough to use in a dark basement, garage, when you drop your keys at night, all without burning out your retinas. It’s also got enough of a throw to see what the dog is poking at in the yard at night, which is more in keeping with the function of a tool like this. The switch is located on the top of the tool, and is smooth and clean feeling, with a rubber covering over it to protect it from dust. Of course, most people who look at it try to twist the battery release since it’s a bit more obvious than the switch, but they usually figure it out fast enough when the battery falls in their lap! 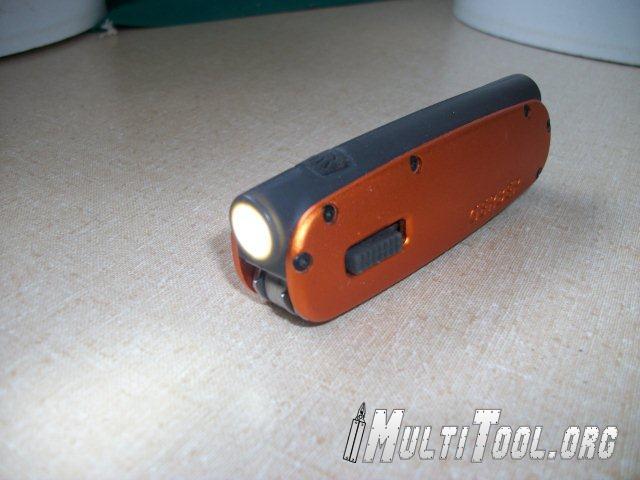 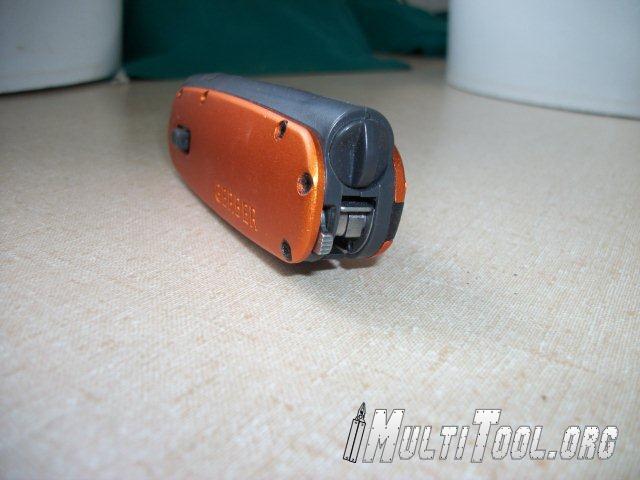 Inside the Fit is a bunch of interesting surprises, first and most interesting is the lengthy bit driver. This is probably the longest bit driver permanently mounted on any tool, and it accepts standard ¼” hexagonal bits so you can replace the factory issue bit if it gets lost or doesn’t suit your needs, or get longer bits if the astounding 2 ¾” inch length isn’t enough reach for really recessed screws. From the factory, the Fit comes with a double ended bit with a flathead on one side and a #1 Phillips head on the other. It’s worth noting that the screwdriver is actually 3” long, but it’s useable depth is shortened by ¼” for the bottle opener, which after extensive testing I can vouch for it’s effectiveness! 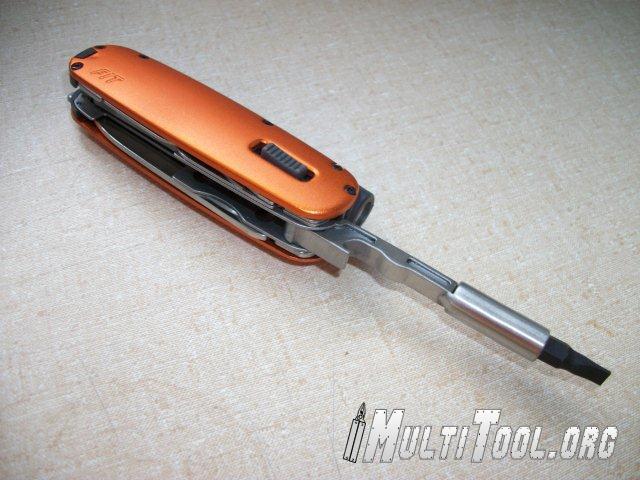 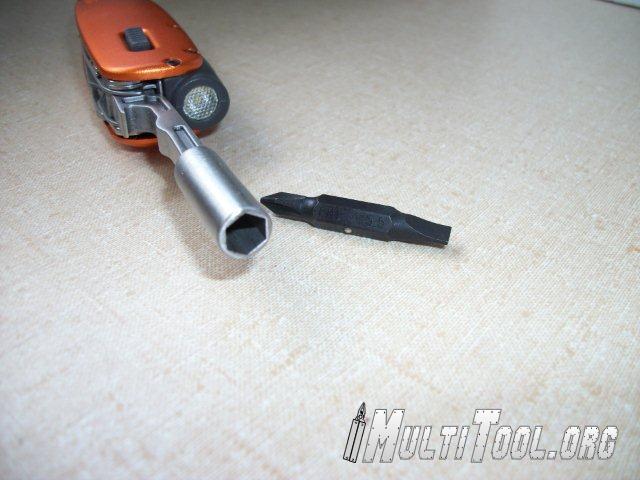 On one side of the bit driver is a partially serrate spear point knife blade. The serrations take up about the first third of the blade, and really, there’s not much exciting about it. It’s a blade, it’s effective, it locks open and it’s big enough for most tasks. While it’s not exciting, it’s certainly useful enough, and for that reason it gets full marks. On the other hand, it loses bonus points for not being one handed opening. In a market full of one handed openers, and given that the blade is oriented to one side, perfectly suited for a right handed thumbstud or opening hole, Gerber opted not to put one there. It’s not a big deal, but I wonder if they didn’t include it for cost reasons, for legal reasons (so they could sell them in Denmark?) or what the issue is, but this tool seems like it was a perfect setup for a one handed opening blade, and somewhere along the line the ball was dropped. 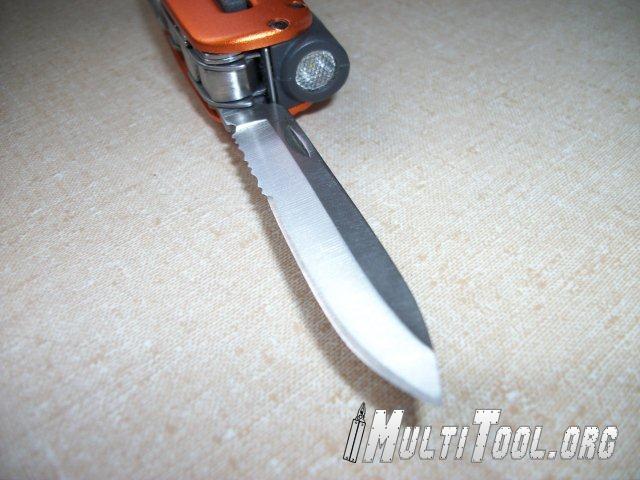 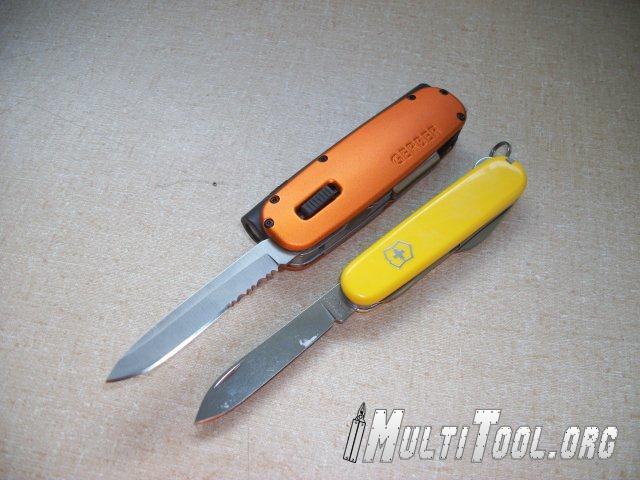 The other side of the bit driver houses the scissors- these are the typical Fiskars scissors found on most Gerber tools, and I find them to be very effective and comfortable to use. This should come as no surprise though, as Fiskars core product group is based around scissors and shears. Like the knife blade and bit driver, the shears lock open with the standard Gerber style SAF-T-LOK system, and the substantial release mechanisms on the outside make the lock easy to disengage when you want it to disengage, and yet is resistant enough to keep accidental lock releases as only a very minor concern. 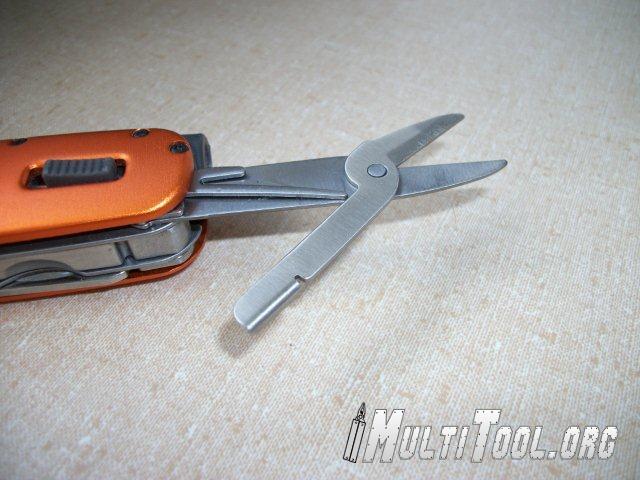 But wait, there’s more! A quick look at the opposite end of the Fit shows a small button/switch/lever thing that tends to get people’s attention, although they often take a few minutes to figure out what it’s for.   Here’s a spoiler alert- open the main bit driver, then flip the small lever and out pops two more smaller screwdrivers that were hidden inside. There’s a small Phillips driver and an even smaller flathead tucked away inside. These screwdrivers don’t lock open, but considering they are designed for delicate work, should not have a significant amount of force applied to them anyway, plus they can only fold 90 degrees in use, as the bit driver would keep them from closing on your hands in the off chance of failure. 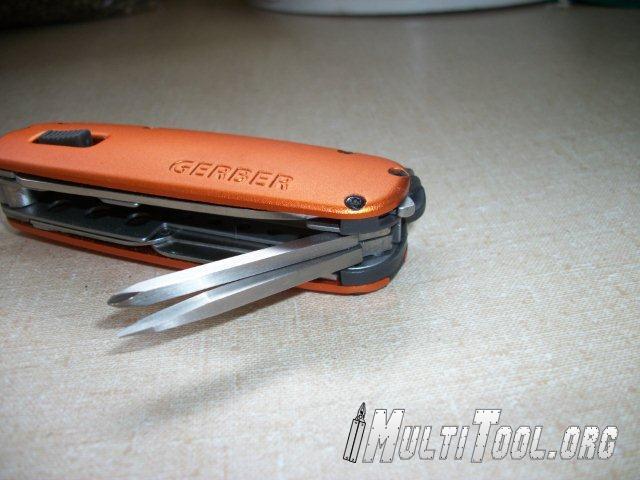 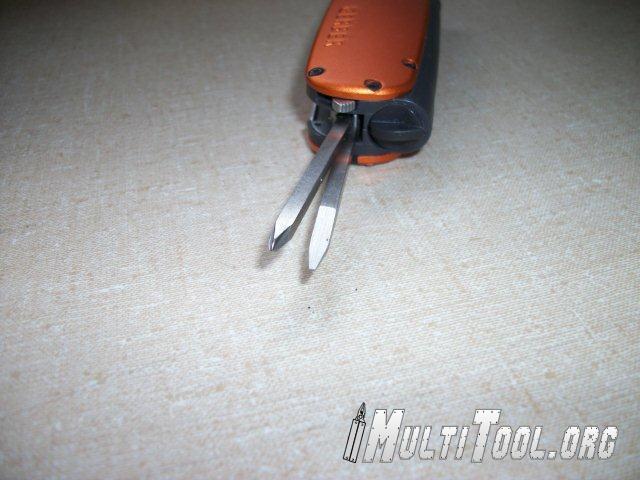 There’s one more surprise in the Fit, and that’s a set of tweezers tucked Swiss Army Style in the handle scale. While they may be a similar type design to the ones normally seen in a Swiss Army Knife, the similarity is short lived. The tweezers on the Fit are several times the size and have some grips etched into the sides making them very comfortable to use. Nice added touch Gerber! 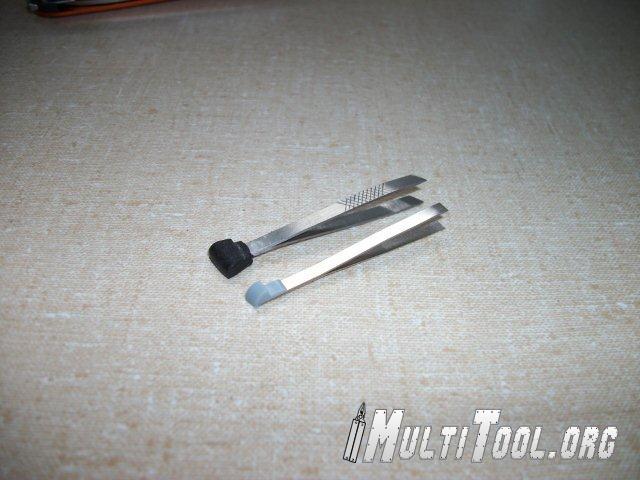 Overall I like the Fit. It’s a nice tool, but a little bulky for pocket carry. I’d reserve this one for a backpack, brief case, glove compartment or desk drawer. It’s useful, but not overly convenient, at least from a carry standpoint. The flashlight could probably be shortened a bit, and the frame seems a little bulky to me. I think with a bit more effort the Fit could be about 75% of its current size with no significant loss of function, but I will admit that it feels nice in the hand. The semi gloss finish and contoured scales are very secure in the hand, and it seems to be about as comfortable to use as a standard screwdriver. You could get more features on something like a SwissChamp from Victorinox, but it wouldn’t feel as nice as the Fit, cost more, and really, most of the time you are going to use the knife, screwdrivers and scissors anyway, so many of the other features would be a waste. I see the Fit being attractive as a gift for fathers and husbands, and actually being appreciated rather than just getting a polite not from a man who knows tools. The only issue I have with it, and it’s hardly significant is that it’s very deceptive- hand it to someone who doesn’t know what it is and they’ll release the battery trying to turn the flashlight on, start pulling on the lock release to see what it does when all the tools are still folded in, then spend five minutes trying to figure out the switch thing on the far side. Great for someone who likes puzzles, but could be frustrating when you ask someone to get the tool for you because your hands are full. 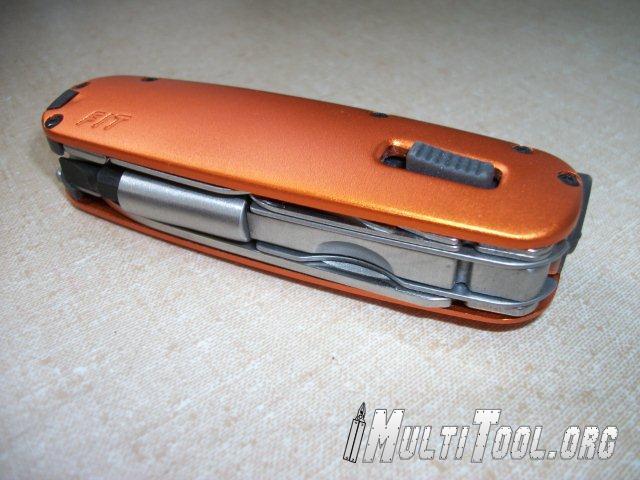 More in this category: « Gerber Curve Review Gerber Crucial Strap Cutter Review »
back to top
Interested in this or a different tool and still have more questions?
Why not join us over on the Multitool.org Forum where our community can help you find what you're looking for!