Locking pliers are a feature seldom explored by the multitool manufacturers, and not a tool I frequently need – but when you do need them, nothing else will suffice. Gerber entered the fray with the Grappler which features one hand deployable locking pliers (one fixed jaw and one movable one) with anvil style wire cutters. On the outside of the tool are four additional one hand opening tools, which means this was the world’s first full sized multitool where everything can be opened one handed, despite conflicting claims from elsewhere. 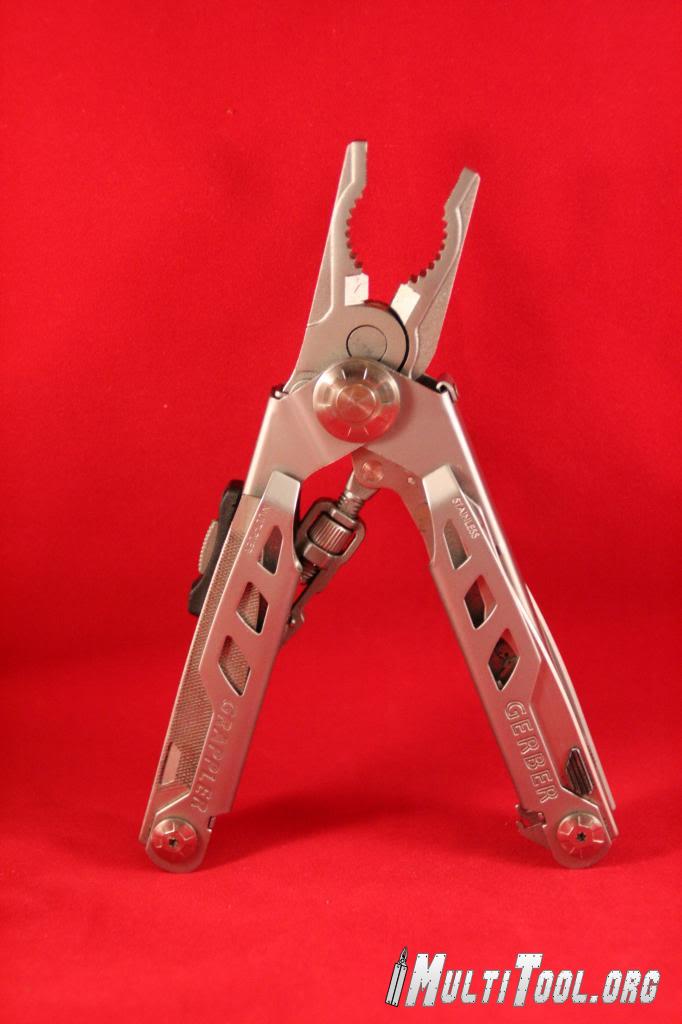 The tools are all liner locking and are: 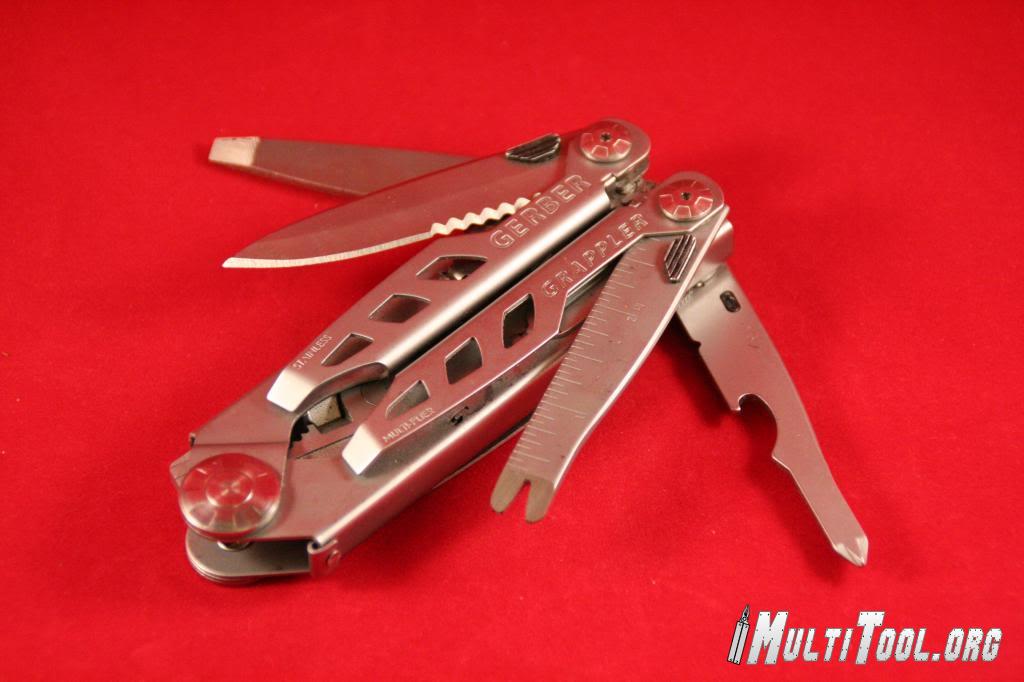 This is a large tool and weighs in at 10.5oz/300g, but this is not really what I would consider to be a heavy duty tool. To see why, let’s look at the pliers first. When deployed the pliers pivot is forward of the handle pivot, and (depending how the adjusting screw is set) when closing the pliers the handles close at a faster rate than the pliers jaws. To those in the know, this screams compound leverage – a phrase which can get multitool enthusiasts quite excited! 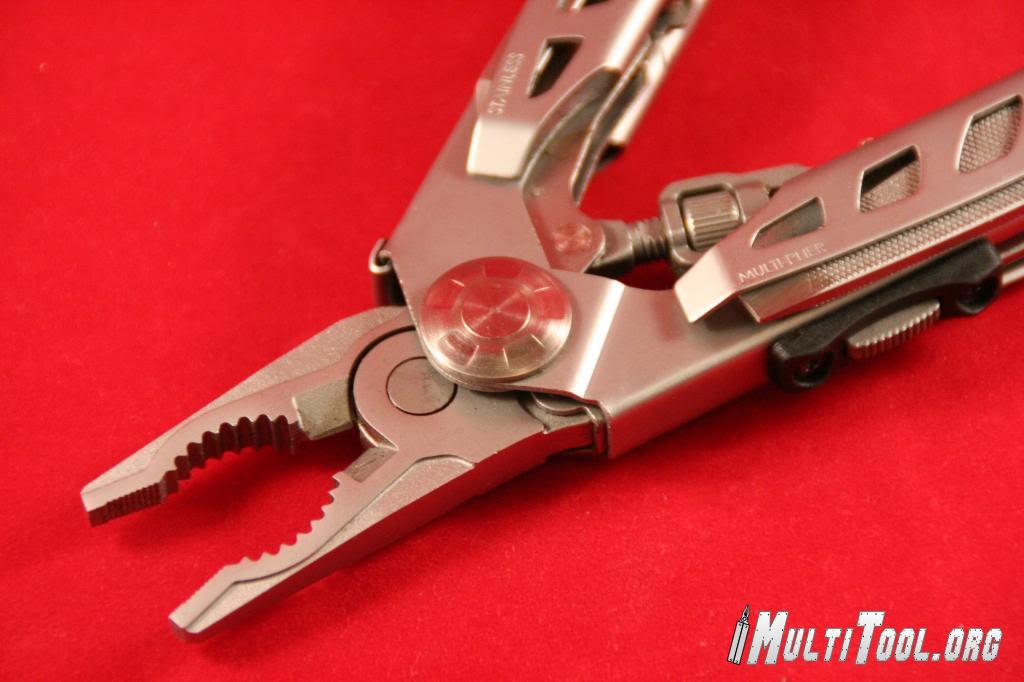 The forces applied on the handles are mechanically amplified (slightly) on the plier head .... but there is a slight complication. 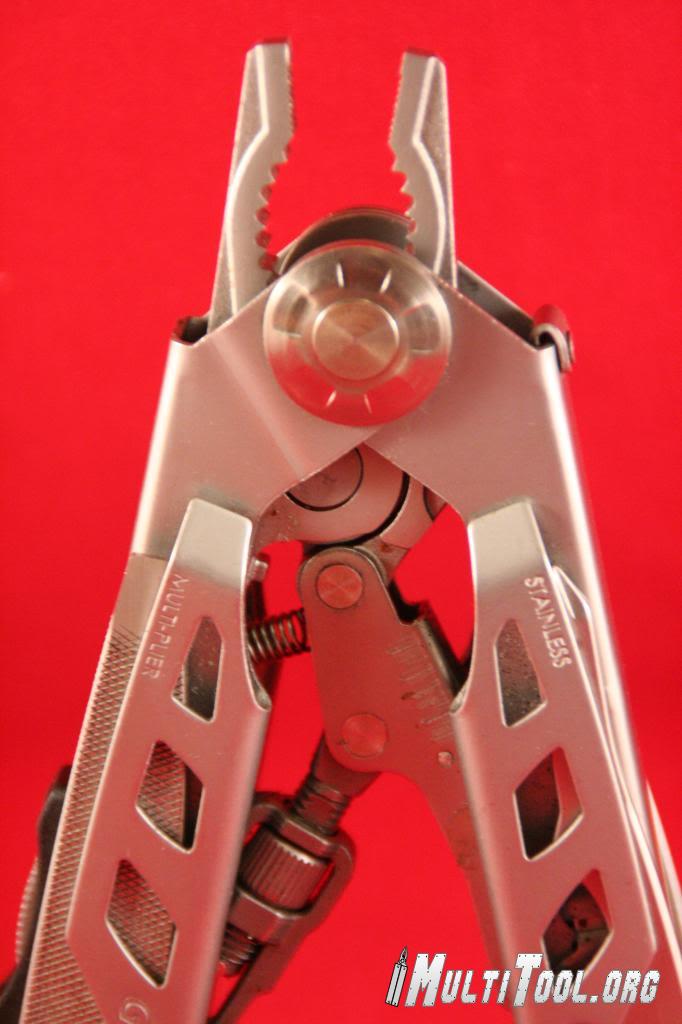 If we look at how the locking mechanism connects to the back of the plier head, we see a small link pin through a trunnion on the back of the movable pliers jaw. This is closer to the pivot than the gripping action, which means that whilst there is a slight amplification of force from the handles to the plier head, there is an even greater amplification from the gripping forces to the link pin. After spotting this I have been careful not to stupidly over exert this tool for fear of causing problems in this area. I will say I haven’t encountered such problems myself, but it may be a potentially limiting factor that users should be aware of. 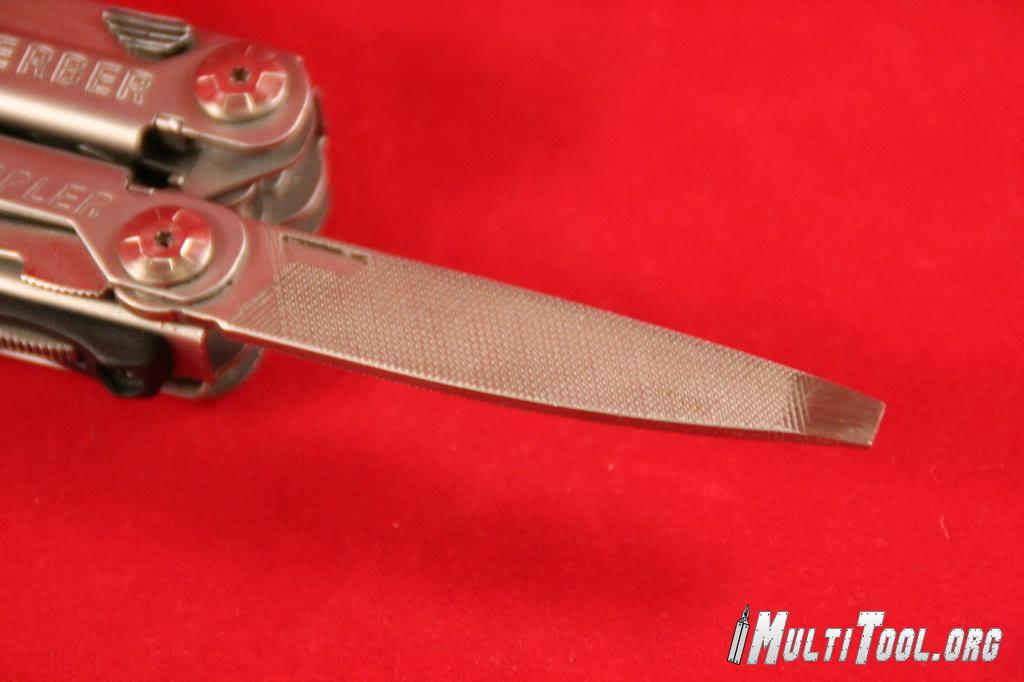 Also, the file (which is not particularly aggressive and lacks any edge grooving) is not hardened to the level most of us expect from files, as this would make it brittle and susceptible to failure as a flat blade screwdriver. The file would be adequate for cleaning battery terminals, or deburring some wood, plastic or non-ferrous materials, but don’t expect to touch up an axe with it if it gets a ding in it. This particular tool does not have a thumb stud like the other three, as this would obviously get in the way when filing. Instead it has a rebated area the same size as the thumbstuds, but I have found it opens just fine with one hand all the same. 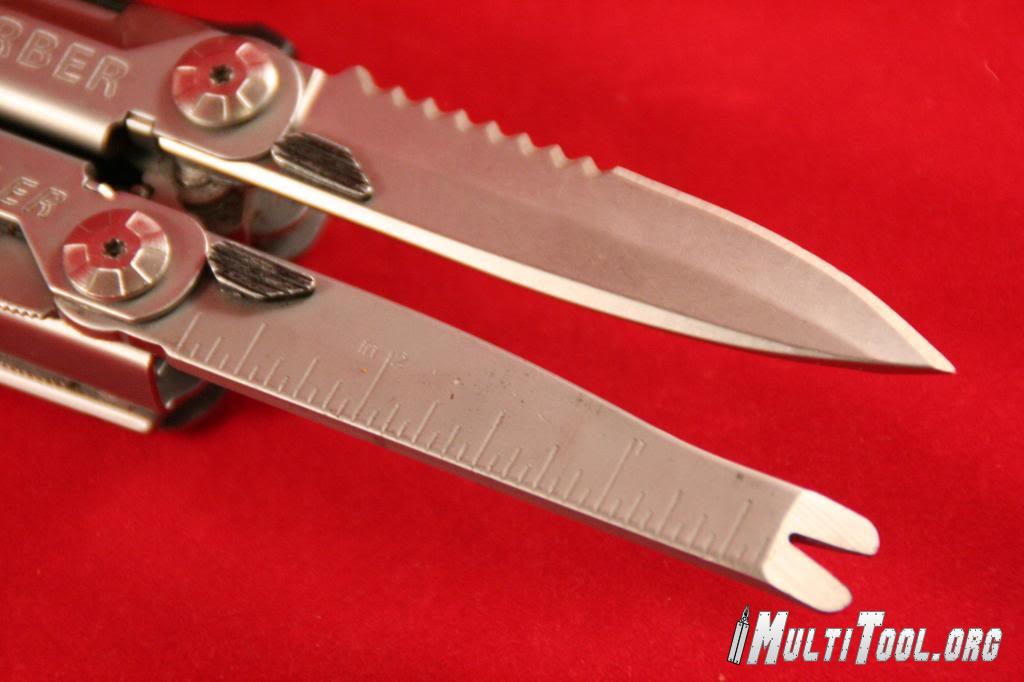 Further potential for over exertion can be seen with mounting the pry tool on a pivot. Personally I grip the base of the pry tool itself (as with Gerber’s Shard or Artifact) rather than the Grappler’s handles. Holding the pliers handles could apply extra leverage, but it could also put exert much force on the pivot. Apply common sense.

However – despite my concerns on durability, I have been carrying this tool for two weeks now and it has done everything I have needed it to without fault. I haven’t done anything ridiculous with it, just whatever needed doing at the time, but I haven’t taken any of the features past their yield point. I initially felt rather disappointed with this tool when I opened the box, partially due to my perception of the durability, and partly as the tools do not fully stow on my particular model. I begrudgingly decided to carry it for a while anyway – and it’s rather grown on me. 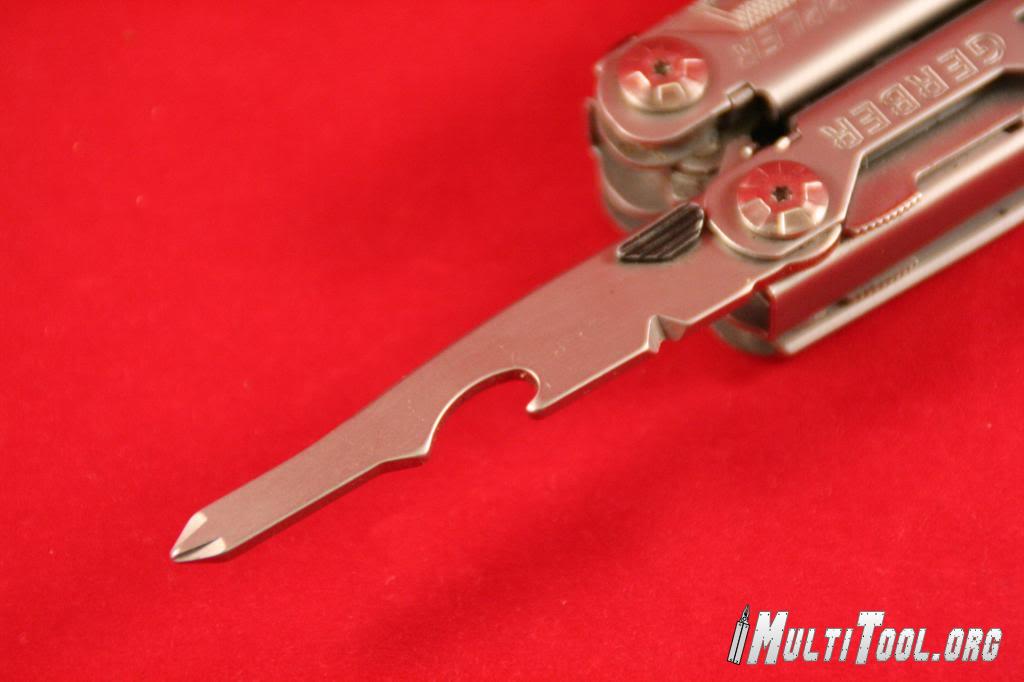 I’ve driver flat head and Phillips screws into my garden fence without a pilot hole, cut garden wire, pried open tins and large brass staples, pulled stubborn shards of metal out of boot soles, and yes – even had the odd beer or six. Everything I have so far commanded of it has been completed flawlessly, though I would still urge users to apply discretion of how much force to apply with this item.

If you want something over engineered that you can subject to horrendous abuse, this might not be the tool for you. If on the other hand you need locking pliers and welcome the addition of nine extra features – by all means take the Grappler for a test drive – you might like it too! 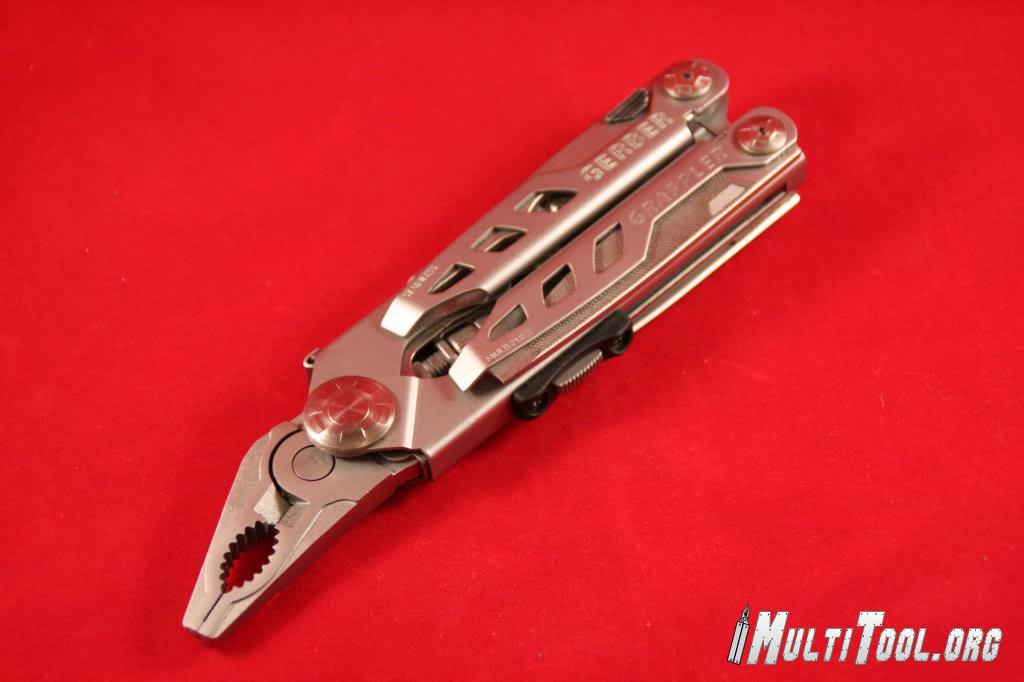 More in this category: « Gerber Bear Grylls Survival Tool Pack Review Gerber Curve Review 2014 »
back to top
Interested in this or a different tool and still have more questions?
Why not join us over on the Multitool.org Forum where our community can help you find what you're looking for!