I’ve recently started getting a lot more specific about my tools and what I want them to do. My latest search has been for an outdoors focussed tool, something to reach for when things go awry whilst out hiking or camping. The first to arrive was the Bear Grylls Survival Pack which comprises a slightly modified Gerber Strata in a brand new sheath design, complete with flashlight and fire steel. Although this tool was reviewed elsewhere on the forum previously by a better photographer than me, I thought I’d share my own perspective on this rather interesting ensemble. 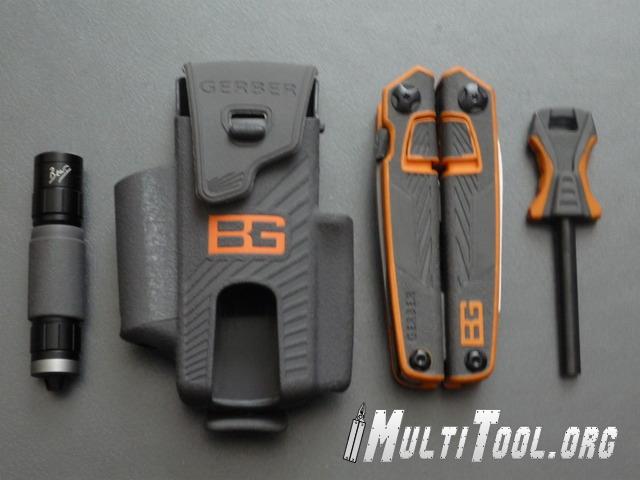 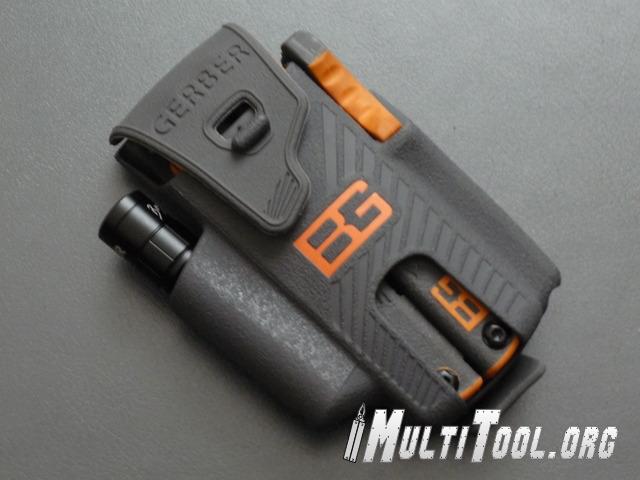 First off the flashlight is an AAA LED light. Not one of the high powered CREE jobbies, just a simple twisty operated fixed output LED. Modest output in favour of long runtimes, in fact 6 lumens for 14 hours according to the packaging. 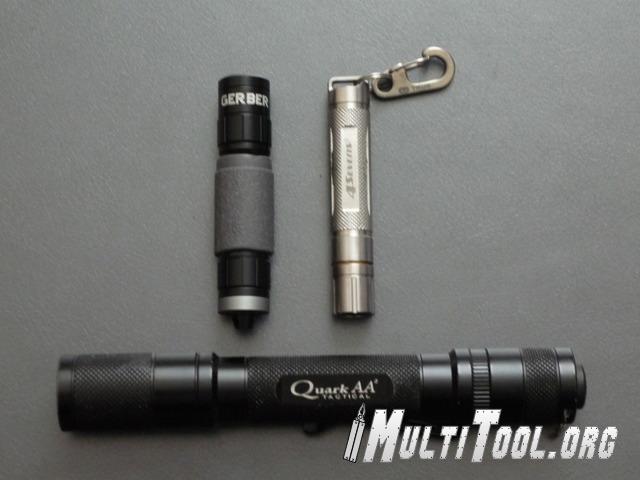 The photo shows a 4 Sevens Preon Revo and Quark AA2 Tactical for size comparison, and also shows the (grey) rubberised area for improved grip. The little “pip” at the end does have a hole for attaching a lanyard for greater safety against loss (improved retention and visibility)

The fire steel is a good misch metal rod in a very ergonomic handle. Plenty of traction in hand, facility for lanyard attachment and good hot long lasting sparks. The last part of that statement I know to be true after nearly setting my carpet on fire whilst testing the fire steel indoors – oops! The sparks travelled well, stayed hot on the floor and had to be stamped out. Yes I’m pretty sure I could light a fire very comfortably with this 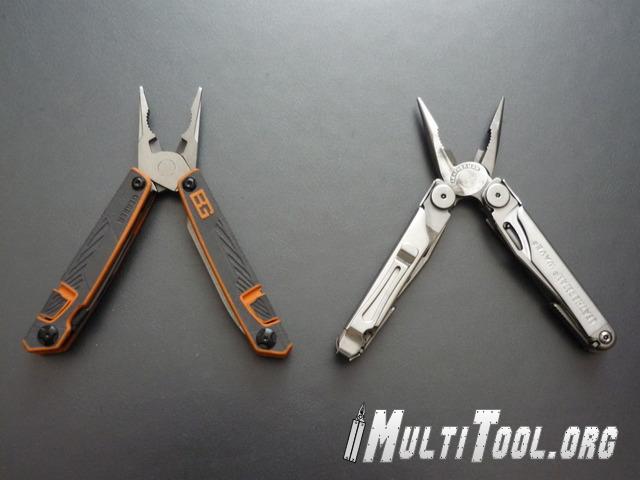 The pliers, shown open here alongside my rather grubby and heavily used modified Wave, are not just posed open but held open by Gerber’s hidden spring mechanism. This lives inside the pliers head and so the user needs to be mindful not to use these too heavily.

This doesn’t mean the pliers are weak necessarily, just not as robust as something which is not spring loaded in the same way.

Before heading down the outdoors tool quest, the hot favourite in my arsenal for this role would have been a Victorinox Spirit X, so naturally that was the tool to compare the tool components with. Plier head size is similar, but again the user needs to be thinking lighter duty due to the issues mentioned above. 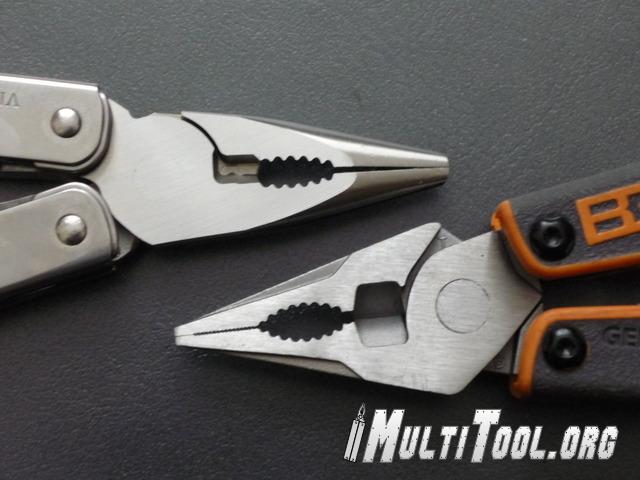 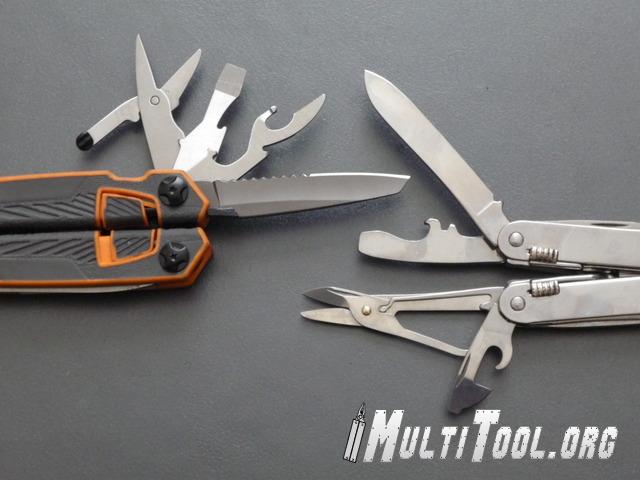 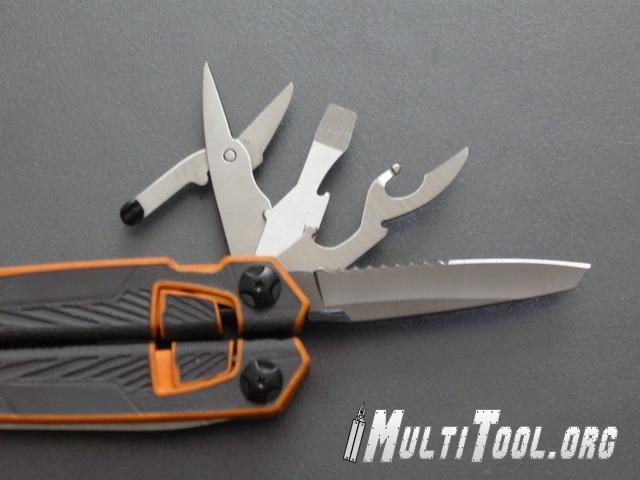 Compared with the Spirit, the scissors will be more versatile due to the wider opening and actually cut a variety of materials very well indeed. The large flat head driver won’t have the prying capability of the driver/cap lifter/crate opener combo on the Spirit, but otherwise I cannot foresee any major problems here. Though not a huge fan of combo edged blades, this one is well done arrived nice and sharp and free of the horrible fash I discovered on my Gerber Flik. The can opener has a very interesting grind to it, not only producing a nice sharp edge but also an effective hook part for getting good purchase under the lip of the can, something that causes many other openers to fail or become very annoying. 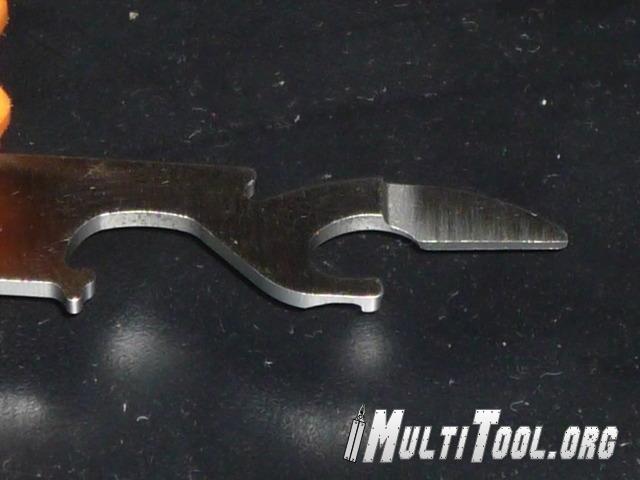 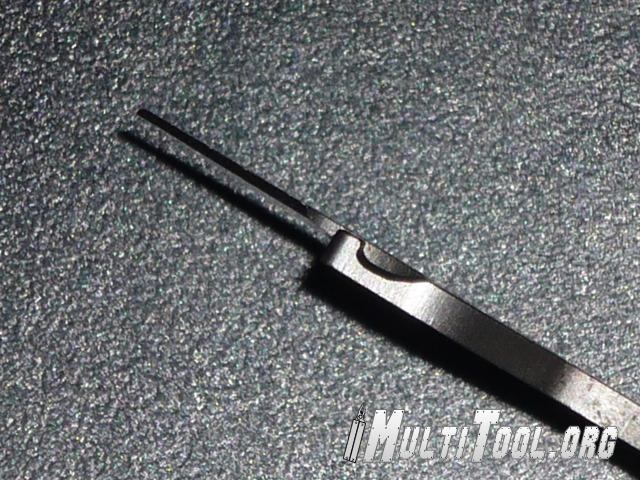 Unlike the Victorinox opener this cuts back towards you (assuming you are right handed), and opened this can of spinach very cleanly indeed. 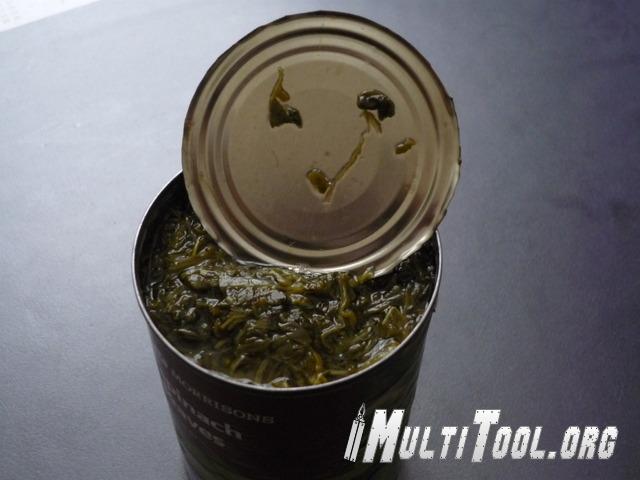 If you find yourself in a life and death situation with a particularly vicious bottled beverage, you’ll also be happy to hear you’ll have the little blighter decapitated in no time at all 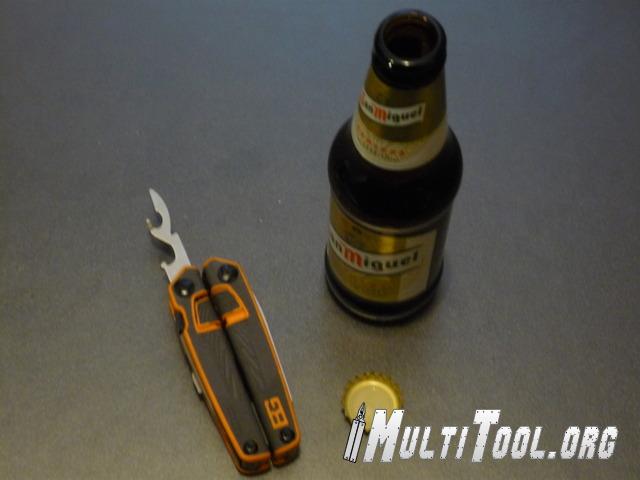 The other handle (Gerber were kind enough to give us two) contains a wood saw, full 3D Philips driver, small flat head driver, and a nail file ... not wood file, not metal file, a nail file ... that’s what it says on the packet and for good reason. 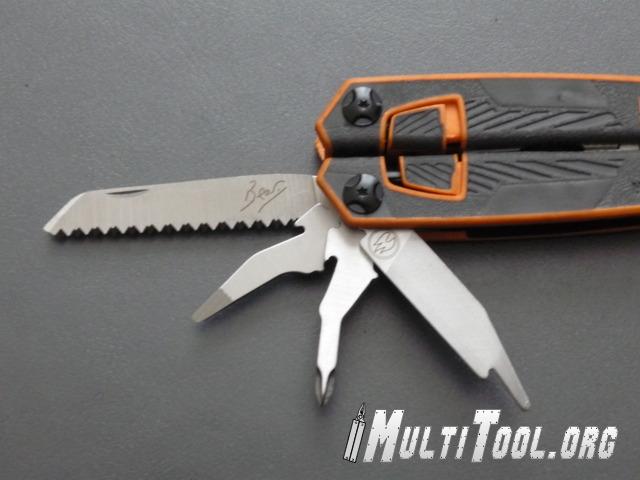 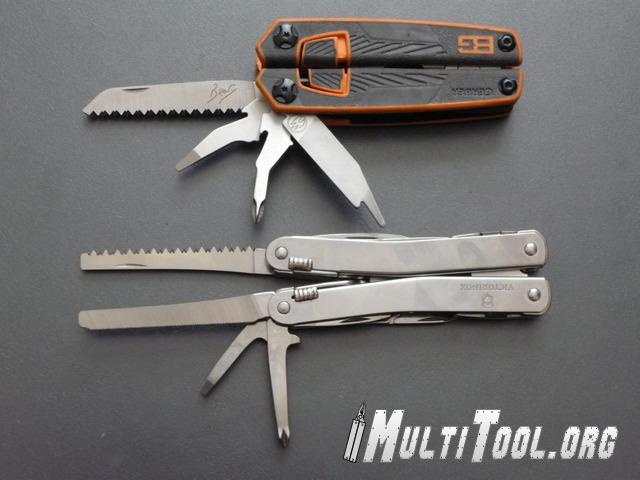 The file is not a hungry “let me at ‘em” (Scrappy Doo style) file like on the Spirit. It’s almost a passive file, as if it’s going to try and achieve the desired result by reasoning with the material in a calm voice rather than getting all nasty and violent with it. If you do find yourself needing to do a bit of survival/tactical manicure work though – you’re all set! It’s also the striker for the fire steel, but as mentioned above - there’s nothing passive in that function.

Another thing many people comment on with the file is the shape - it’s weird! Apparently Gerber have said this is to provide a narrow file for working in tight places. Nonsense – it’d made this way because that’s the only way it will fit. What I didn’t realise from previous online pictures was the offset of the plier head in relation to the handles. This means that the slope of the file sits along the edge of the plier head in the closed position, and the little nick on the other side was the easiest way of ensuring you could hook it out with your thumbnail. 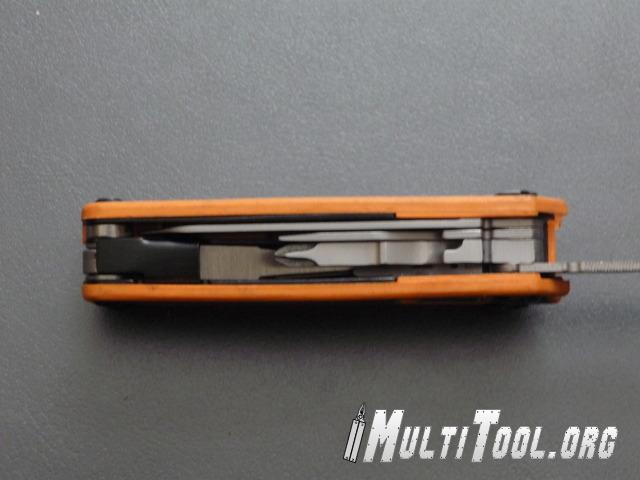 That said there was some thought having gone into this offset – notice the wire cutters. They have been oriented so the anvil cutters favour the nearer handle for cropping wires off short. 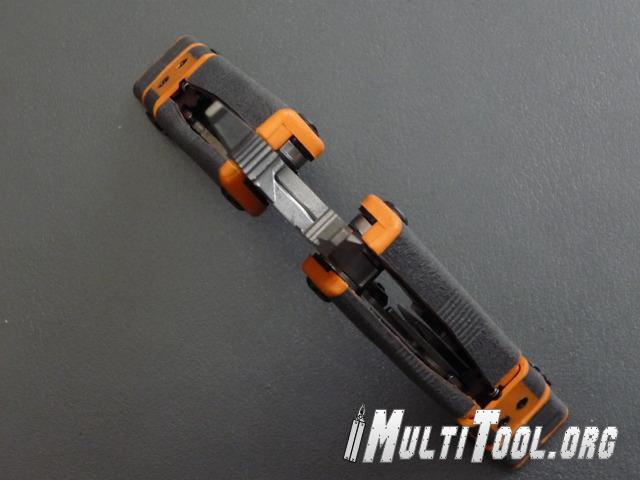 Here, maybe a close up will help you 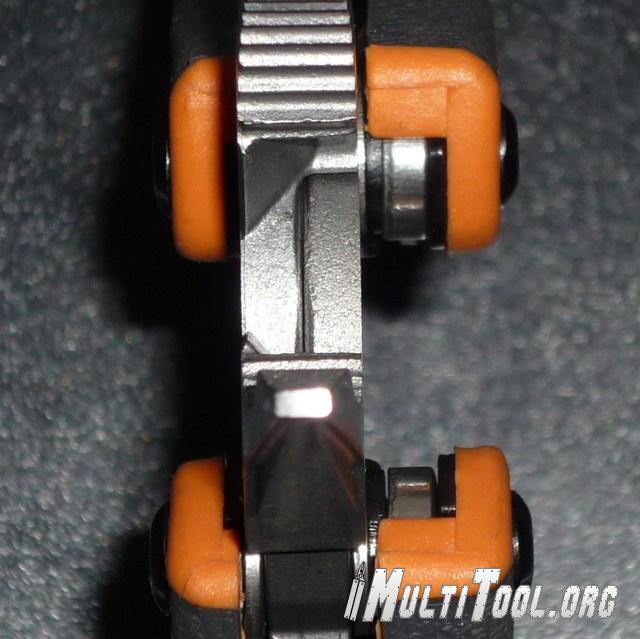 Thankfully the saw is a little more “up for it” than the file, and is roughly equal to the length of the Spirit’s saw – both suffering that annoying little quirk of not having teeth right to the tip too. The saw did however harvest this dry stick quite well. Not quite as well as the Spirit maybe, but well enough. 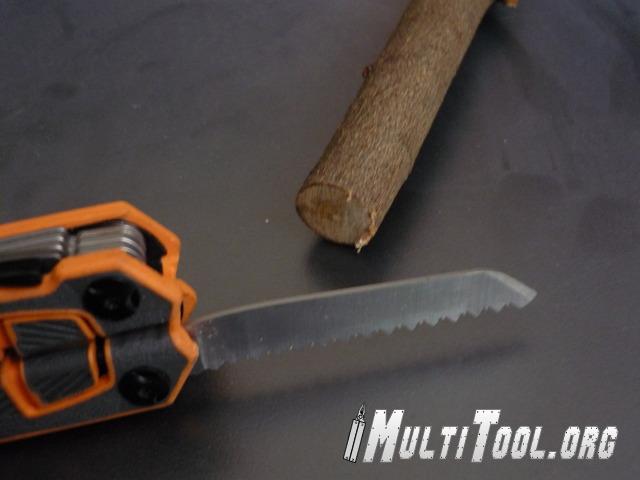 The Philips driver is a big improvement over many of Gerber’s other Philips drivers. Central, decent working length for recessed screws, and a full 3D profile for purchase and strength. Again, this is not quite as excellent as on the Spirit, but still very good. As for the small flat head driver – well, that shouldn’t be there should it? This is supposed to be a survival tool endorsed by a survival expert, and while there may be circumstances where a small driver will be useful, I think many people would have liked to have seen an awl with sewing eye for fixing gear and other improvised craftwork. I know I would, and if I can get a hole in the thing, that’s exactly what that driver will become

Finally, lets have a look at the sheath. Lightweight, streamlined, durable, secure, non-moisture retaining, and really rather clever. The light and fire starter are a secure friction fit, which give ample security against “inadvertent deployment” or stuff doing a Houdini on you. The security of the multitool itself is even better. Not only does the flexible flap hook over the moulded tab, it does it quietly too – perfect for those of you who like to hide in the undergrowth and get your tool out without anyone hearing. 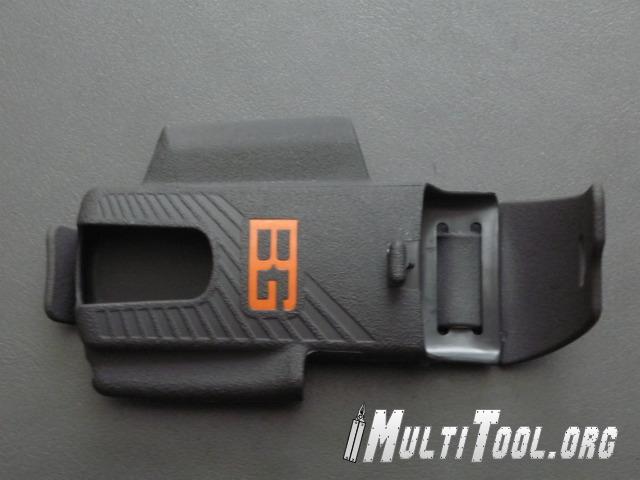 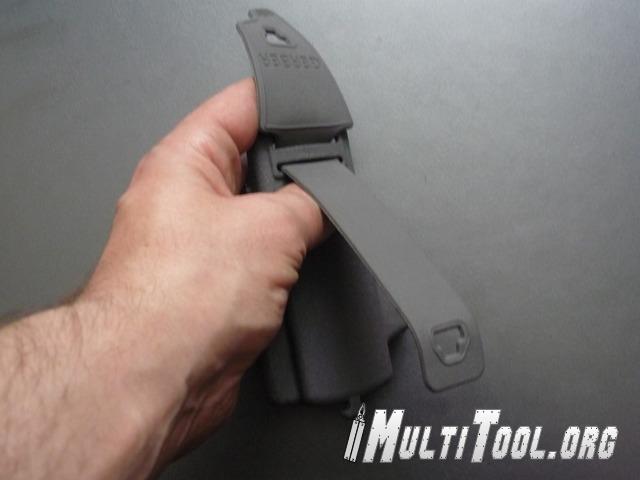 On the pictures below you’ll see that the top flap is also the belt loop, which pops in and out of a couple of slots at the top of the sheath and has the same fastening at both ends, which means you can get the sheath on and off without removing your belt. The added bonus is that where the loop/flap protrudes through to the inside of the sheath is just above where the tool sits, and when the tool passes this point it “clips” nicely into place.

Want a comparison? Remember the earlier picture of the tool next to a Wave? Well if you compare this loaded sheath to that of a Charge AL, the BG sheath isn’t that much wider, especially considering there’s nothing in the elasticated loops on the Leatherman pouch, and I’d feel much less confident about securing a light and fire steel in those loops rather than the moulded pockets on the BG sheath. 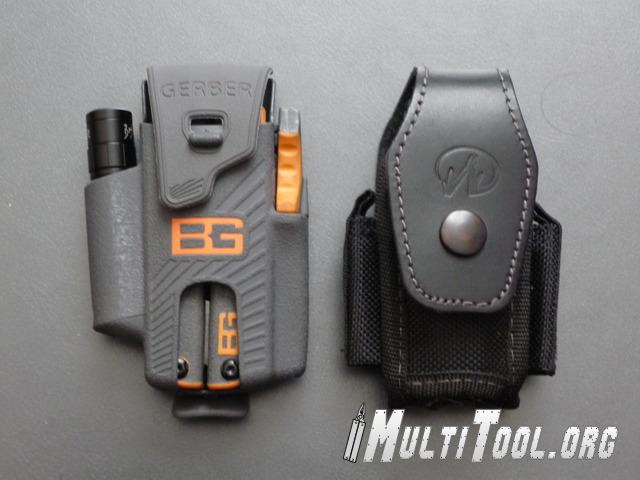 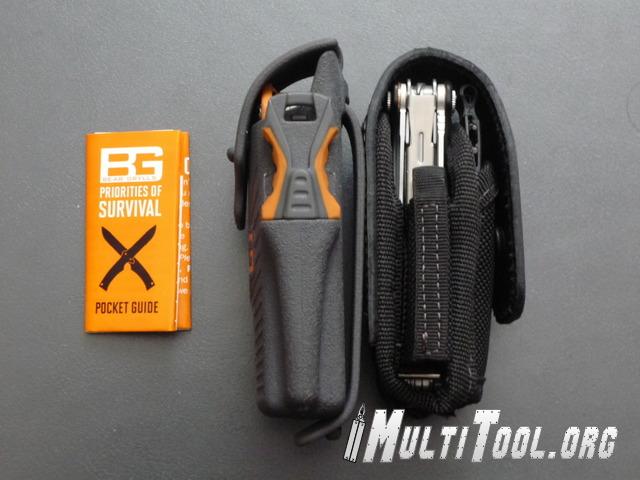 In profile view you get a better appreciation of how slim they have gotten this sheath – and don’t they say that black is “slimming”? Didn’t work on Fatty Chargebuckle, did it?

So, overall thoughts? Fit and finish? Is it any good?

The fairest description I can put on it, is “perfectly adequate”. The fit and finish are not brilliant. There is some flex in the handles, and play in the locked out tools. The grip isn’t fantastically grippy, but grippy enough. It will do the job though, which is the main thing. Between the saw and knife this fairly hard bit of stick gained a nice notch, and with a dry stick like this – that’s tinder up for grabs too. If like the guy whose name is emblazoned on this thing, you are (in his case formally) a member of an elite special forces unit who is liable to be deployed anywhere in the world at a moment’s notice and need something you can beat the life out of and have it sit there begging for more – you’re going to break this – go and buy a Swisstool! 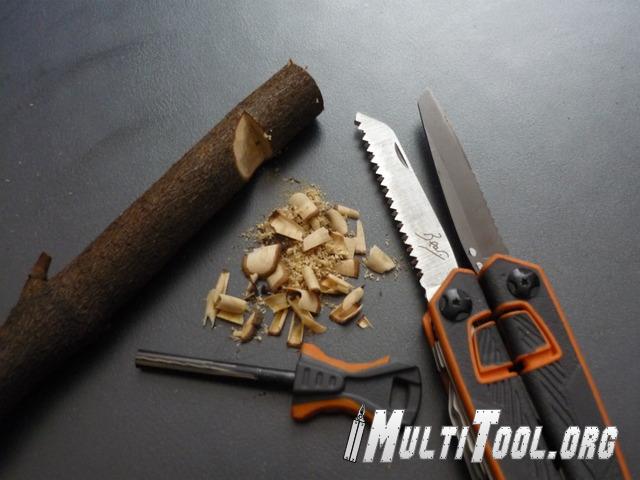 If on the other hand you are just someone who wants a decent bit of kit to take hiking or camping with you – not just for “what if’s”, but as a working tool – then this will probably do the job quite nicely. That is assuming you are sensible enough to recognise this tool is not ultra heavy duty, does have limitations, and can work within those limitations – otherwise you’re going to break it too

Conclusion: Way better than what I expected to find, but needs using respectfully to avoid failure

Cons: No awl for kit repair and field craft No lanyard attachment for working near water Rather disappointing file

More in this category: « Gerber Crucial Strap Cutter Review Gerber Grappler Review 2014 »
back to top
Interested in this or a different tool and still have more questions?
Why not join us over on the Multitool.org Forum where our community can help you find what you're looking for!