Having done so many different things with their tool line, Leatherman decided a few years ago to get into pocket knives.  However, being Leatherman, they had to do it their own way, and look at knives with tools added, rather than their more typical method of making tools with knife blades on them.  The top dog in this particular line was the now discontinued h502. 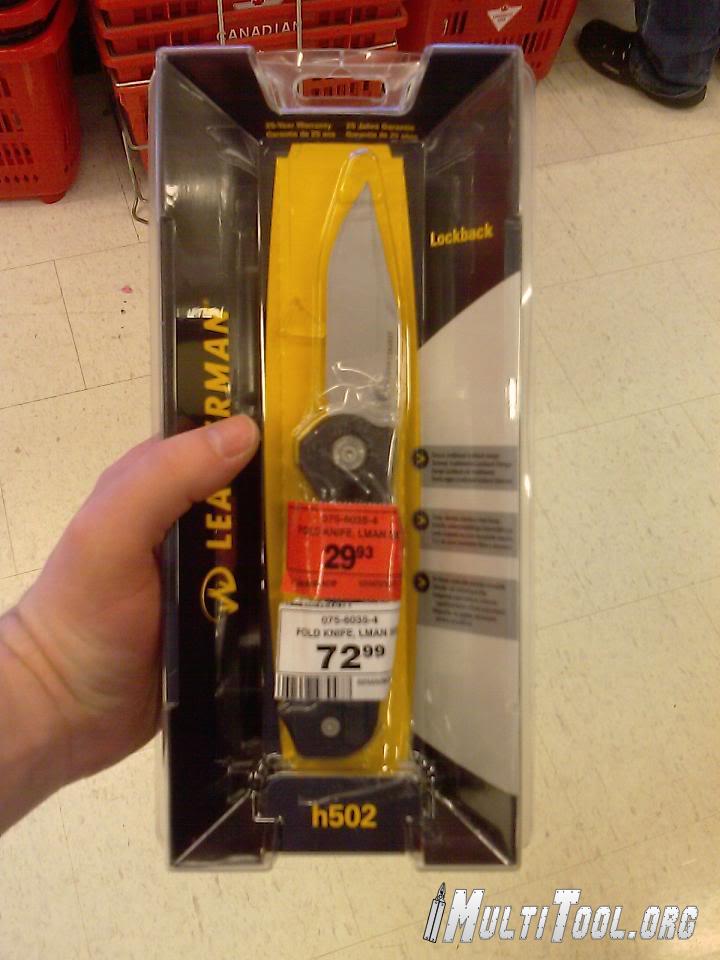 Being the largest in the series, the h502 is a pretty bulky knife- so bulky in fact that it's the only one in the entire series that doesn't include a pocket clip, but rather lives in a nice two tone sheath, like the one issued with the Charge SLV and other special models.

The substantial clip point blade opens with a single sided thumb bolt- like many Leatherman multitools, the h502 is not ambidextrous, and the bolt is not moveable, since a left handed orientation would get in the way of the bit driver, which opens Swiss Army Knife-like in a layer next to the main blade.  This problem could have been easily remedied with an opening hole similar to the ones found on the Wave, Charge or Skeletool models, as the blade is easy to reach with the left hand.  A traditional back lock mechanism holds the blade open- a first for Leatherman, but this is such an established lock type that Leatherman's lack of experience with this design is of no concern.

Next to the main blade as mentioned above is the bit holder, which carries one of Leatherman's typical double ended bits.  Two more double ended bits ride in the thick rubberized handle scale, meaning the h502 is equipped with three flatheads, two phillips and a Torx driver.  Other bits are available from Leatherman, as well as a bit adaptor that allows you to use standard 1/4” bits, but given the bulk of the h502 I see no reason why it couldn't have been issued with standard 1/4” bits, or more options than multiple flatheads.  If you've read a few of my reviews, you know three flatheads on one tool is something I consider to be excessive.  The bit driver also doesn't lock open, so be careful, as certain twisting motions can cause it to fold on your fingers.

In the opposite end of the same layer is a can opener.  It also doesn't lock open, but it has a decent forward pitch which makes it quite effective for what it does.  The long, wide handle makes it easy to get a grip on, but if you wrap your fingers all the way around it, you'll be lifting on the spine of the blade, which could be uncomfortable on larger or multiple cans.

On the backside near the lock release button is a litle slider switch that extends the carabiner.  I always thought the carabiner was a bit flimsy, especially when compared to the rest of this robust, oversized knife, but it works well enough.  The gate functions well enough, even if the spring doesn't close it entirely.  It's more than adequate to hold onto a belt loop or the strap on a backpack, but it does rattle a little bit.  The carabiner also functions as a bottle opener, and works well enough in that capacity that I have yet to die of thirst!

The bottom line on the h502 is that it is a nice, if bulky knife.  It can be found for a decent deal on closeout in various places since it is discontinued, and is a good, functional tool if found for a reasonable price.  The models that replace it though are much more svelte, and so the average user may want to look at one of them, or a more versatile plier based tool, as the h502 is somewhat oversized for the limited options available.

More in this category: « Leatherman E302 Utica Kutmaster Rescue Tools Review »
back to top
Interested in this or a different tool and still have more questions?
Why not join us over on the Multitool.org Forum where our community can help you find what you're looking for!