I've been eyeballing these in the catalogs since they first came out a year or two ago. I use scissors almost as much as I use a knife blade, and the Twocan has both. But it was not really clear to me how well the scissor mechanism would work, and I wasn't inclined to spend the money on an experiment. The price on them has been dropping steadily however, to the point where even a cheapskate like me can afford to buy one. At under $20 I figured there wasn't much to lose. The one I bought two weeks ago showed up yesterday. 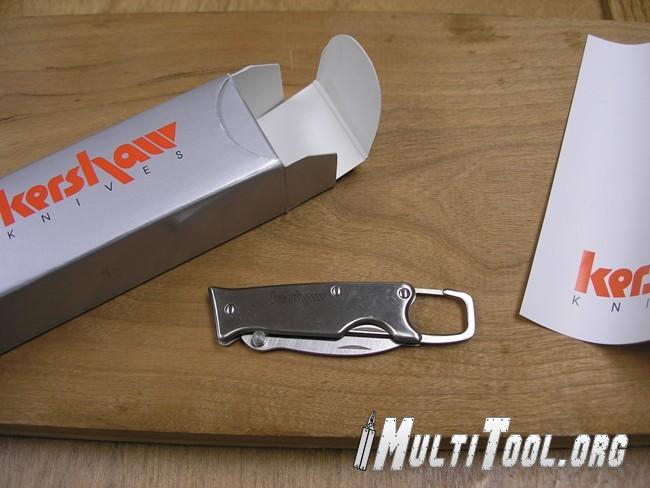 The first thing one notices when taking the Twocan out of the box is how small it is. For some reason I had expected the whole thing to be bigger. My version has the carabiner clip (there is also one sans carabiner) and it measures 2-3/4" in the closed position. (70mm) Flick the blade open and it's about 4-1/4" long overall. (108mm) 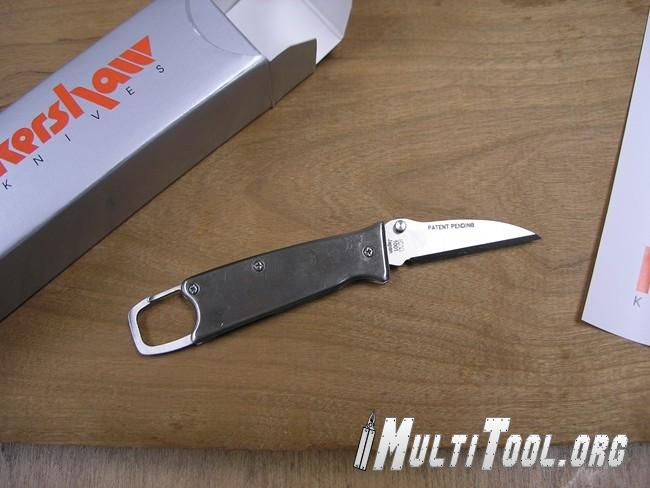 Like many (all?) of Kershaw's knives, the Twocan is made in Japan. Quality is superb, something you can tell from the moment you get your fingers on it. The little wharnecliff blade is razor sharp, and has a quite shallow grind angle. It would be ideal for picking splinters and such. At only 1-1/2" long though it is a bit shorter than I like for slicing apples. 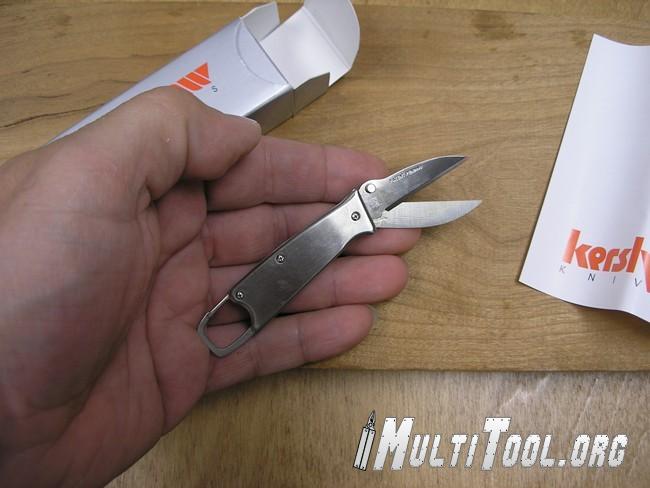 At the base of the knife blade there is what appears to be a stud for one-hand opening. Try as I might though, it was just too small and improperly positioned to flick open the blade. It wasn't until I took out the second blade, and the Twocan was transformed into a scissors tool, that I understand the true purpose of the blade stud. It is actually a "stop" that halts the motion of the second blade on the downstroke of the scissor. A healthy spring action opens the scissor back up for the next stroke. (Both blades have proper nail nicks for opening.) 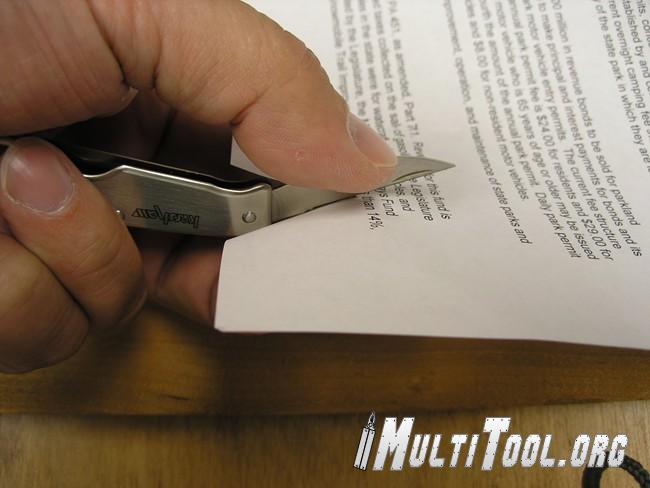 As would be expected, the second blade is also deadly sharp, and the scissor action cuts many things with ease. Instead of putting your fingers through looped handles like regular scissors, with the Twocan you simply squeeze the blades together in order to cut. They spring back open, you advance the tool, then squeeze again to make the next cut. Easy.

Except it doesn't work so well on some things. Long cuts on a full piece of paper, for instance, run into trouble after the first couple inches. Trying to push your whole hand into the short length already cut becomes a problem. Also challenging is heavier material, like cardstock or thick fingernails. There just isn't enough leverage on the cutting edges. Don't even think about trying to open up a blister pack.

But short cuts in paper are a breeze, as would be fishing line, packaging tape, and vacuum sealed food packages. This little Kershaw isn't going to replace your full sized regular scissors, but there are many places where it would come in handy.

Oh, and I almost forgot about the carabiner. It is all stainless steel with good spring pressure. Very secure, I would have no concerns of it ever coming off my key chain. All in all, a classy touch to a clever little knife.

More in this category: « CRKT Edgie Leatherman h502 »
back to top
Interested in this or a different tool and still have more questions?
Why not join us over on the Multitool.org Forum where our community can help you find what you're looking for!