One of the most overlooked little tools in the multitool industry is Leatherman’s Micra. I say this because little is ever said of this keychain wonder, and yet just about everyone has one- at least had one judging by the vast number of used tools available at TSA auctions! Much like the Victorinox Classic or Wenger Esquire models, the Micra is one of those tiny little tools that you completely forget about until you need it, and you probably use it a lot more often than you realize, which is something you will only find out after it’s gone!

Ordinarily I'd find a pretty, shiny new tool to take pics of, but this time I felt it best to show off my battered old Micra to illustrate how useful this little gadget really is!

An ingenious design, the Micra follows the standard Leatherman folding plier type design, except a lot smaller, spring loaded and with scissors rather than a plier head. The outside of the body features the standard multitool type ruler in inches and centimeters, but you won’t be measuring much with this little tool as it maxes out at about 4 inches or 12 centimeters. In standard multitool fashion there are also a few tools tucked away into the handles. (Side note- if everyone already has one of these as I mentioned before, why am I describing it?) One handle houses a small clip point blade, flathead screwdriver and one of the better nail files available on a tool, but more on that later. The other handle conceals a set of tweezers, phillips screwdriver and a unique combo tool that functions both as an eyeglass screwdriver and bottle opener. The folding lanyard ring is also on this side, but once again I fail to see the point of a folding lanyard ring, which to me is space that could have fit another tool. 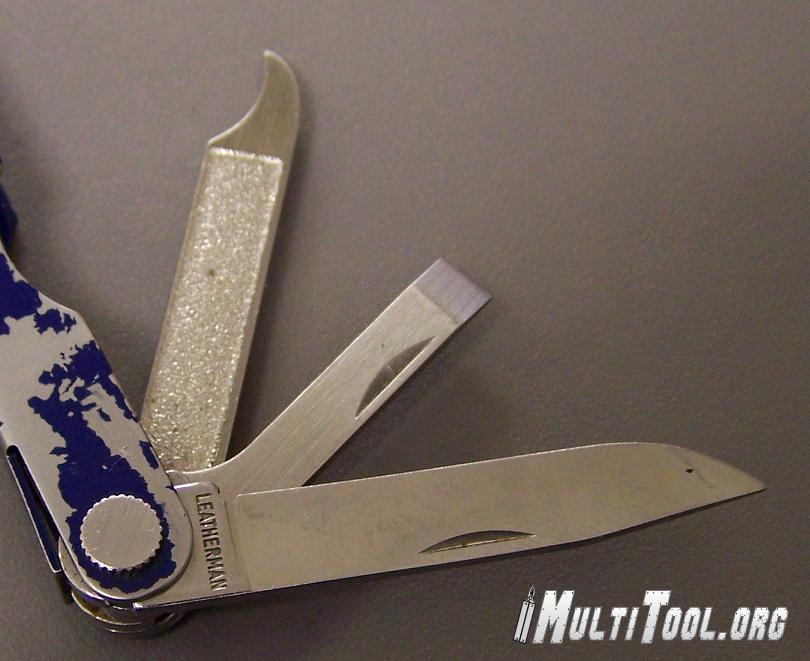 Each tool is quite well made and well thought out. The small blade is quite sharp and big enough for reasonable sized jobs. I wouldn’t suggest trying to field dress a moose with it, but for most daily applications it supports the scissors quite well. 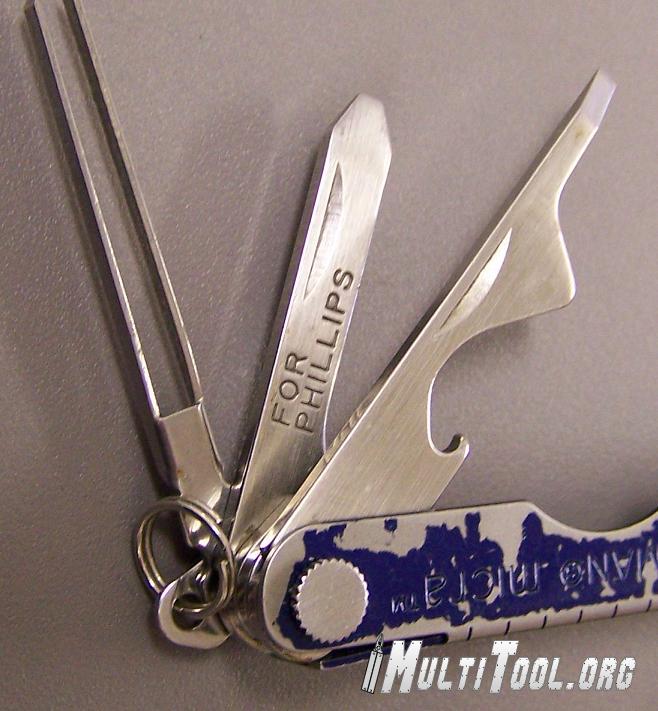 The flathead screwdriver strikes me as a bit of a failing, as anyone who has read previous articles by me will be expecting. It is a perfectly adequate flathead screwdriver, but that is all it is, and that’s the problem. How hard would it have been to carve a few notches into the side to act as a wire stripper? Or a small hook on the bottom to turn it into a bottle opener? I know there already is a bottle opener on this model, but the combo tool could have been easily converted into a can opener if the phillips had a bottle opener. Just a plain flathead is unimpressive, but this one does do what it’s supposed to, and that will have to be good enough I guess. 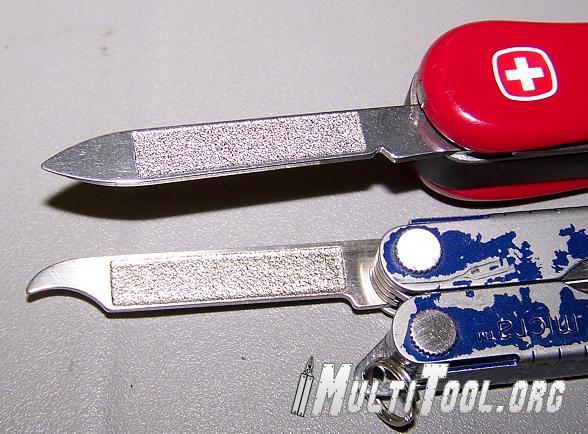 Next up is the nail file, which in my opinion, is second only to the nail files offered by Wenger on both the 63mm and 85mm series knives. The texture of the abrasive is aggressive enough to be useful, but not enough to be uncomfortable or damaging. Call me what you will, but I hate having crud under my nails almost as much as I hate having jagged nails catch on things! 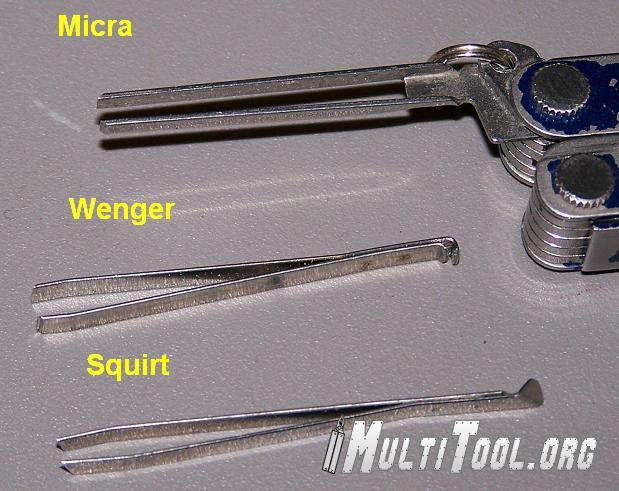 On the other side, the tweezers are easily found as they extend through the handle and are visible (though inaccessible) when the tool is closed. The tweezers are a decent and useable length, but I find them to be somewhat awkward as they are attached to the body of the tool, similar to any other fold out implement. I imagine I am not the only one that feels this way as the next set of keychain models ( Squirt series ) have removable tweezers similar to those found on Swiss Army Knives. Easier to use, but also easier to lose. Still, I prefer them to the ones on the Micra, although again the Micra’s tweezers are perfectly adequate. 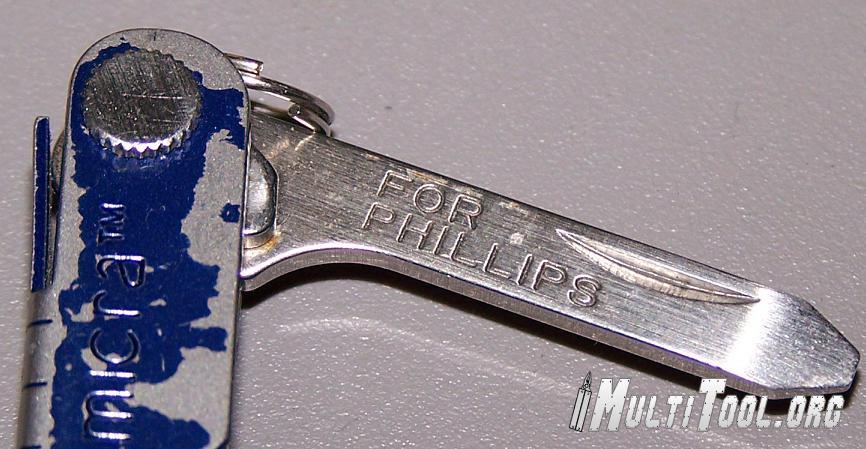 If the flathead screwdriver was unimpressive, the phillips is amazingly dull. The only saving grace with it (other than being adequate) is that at least some effort was put into it’s manufacture, although not much. The main difference between the phillips and flathead drivers is that the phillips has the “corners” of the blade cut off so it will fit a phillips head screw. Leatherman also went the extra mile and engraved “FOR PHILLIPS” on it. Functional, yes. Adequate, certainly. Interesting, not in the least.

The combo tool is quite the opposite however. While it’s not the best designed implement out there, it is not only functional but also efficient. This is the type of approach that each tool should have- maximum versatility with a minimum of labour intensive manufacturing. In one odd shaped implement you have a very functional eyeglass driver and an effective bottle opener- the latter I have proven on many occasions!

Lastly, the Micra’s raison d’etre, the scissors. Leatherman’s design allows for a significant sized set of scissor jaws which are almost the length of the handles- a great ratio in tools of this type. While much of the scissor head is taken up by a respectable pivot pin, this really only enhances the sturdy feel of this tool, as does the significant strength of the spring mechanism. There is also a very useful amount of cutting surface available on the Micra. 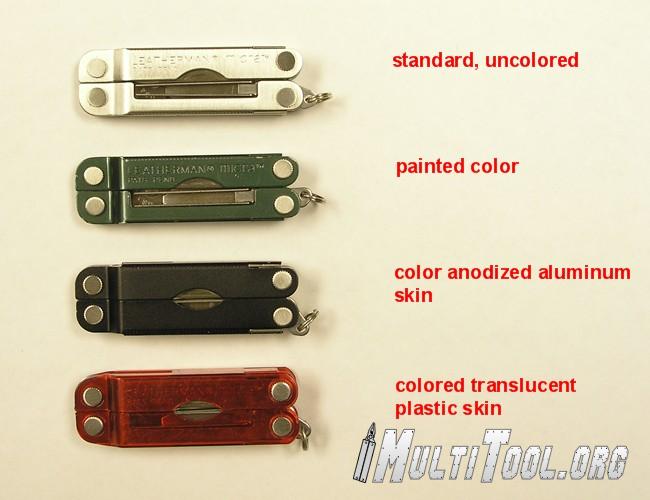 The Micra comes without any real options, although there have been several variations issued. The original Micra was offered in polished stainless, and that design survives intact through all of the various generations. In an attempt to brighten up the standard silver type tool Leatherman first tried painting them in a variety of colors, but the paint chips and peels quite easily, exposing the bare, unpolished steel underneath. This defeated the purpose of making the “pretty” in the first place. Next Leatherman attempted to sheath the steel handles in aluminum that was anodized in different colors. This was an effective method of making them look nicer, but probably was dropped due to the extra cost of machining aluminum covers to exactly match the steel handles. The latest attempt was probably the best match of cost and function, and is a plastic cover on the handles. In addition to being affordable, this allows the ruler and other markings on the polished steel handle underneath to show through. This means that the “basic” polished Micra can be made, and the options can be added at the end of the line if needed. The drawback to this is that translucent colored scales start to look used very quickly as small scratches can cause them to “cloud,” and that any lint or other “gunk” can gather between the steel and plastic handles and is quite obvious. 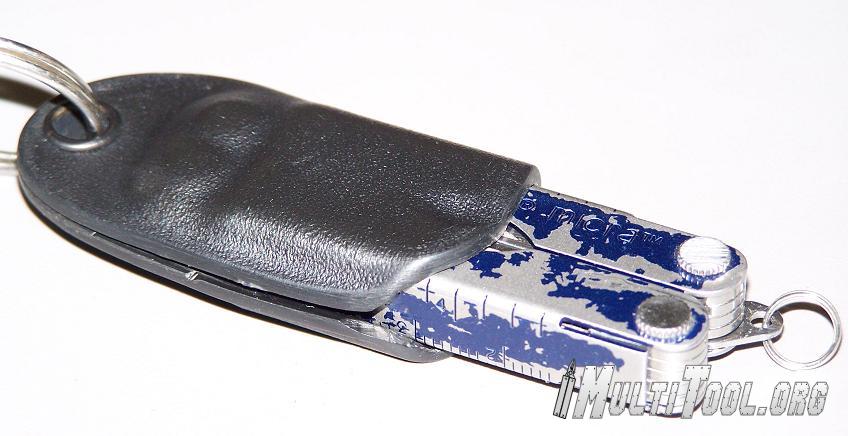 I personally carry a painted model that has seen better days. I bought it used in this condition, and don’t mind the “ugliness” of it as it is still functional. I also suggest that anyone considering a Micra for regular carry find some method of disengaging it from your keys when you wish to use it as some keychains can make it very awkward to use. I used a quick release clip on it for some time before eventually switching to an On Scene Tactical kydex keychain rig. This sheath holds the Micra securely and will not let go inadvertently.

Overall, the Micra is a very useful tool and I firmly believe that is the reason they have proven so popular over the years.

More in this category: « Leatherman Squirt E4 Review Leatherman Juice XE6 Review »
back to top
Interested in this or a different tool and still have more questions?
Why not join us over on the Multitool.org Forum where our community can help you find what you're looking for!