In the multitool market, manufacturers primarily create tools with pliers as their primary function. Occasionally we see interesting designs that depart from the norm and are pretty much in a league of their own. When CRKT/I.D. Works created the Zilla and the Guppie; there was a surprising acceptance by the multitool community. Someone had decided to try something different with a unique flair to them and they appeared to be an instant success. After the original release there were some folks claming that the tools where too large. A small and more compact version of the tools are what would hit that certain sweet spot with the consumers. With reduction in size came compromises. The Zilla Jr. could not accept standard hex bits anymore and the ‘Lil Guppie no longer had the ability to use bits at all and was reduced to using drivers that were part of it’s design. I.D. Works came up with an excellent solution to remedy the problem. A hex driver, one that would not replace the smaller tools but would compliment them instead. Thus was born the Get-A-Way Driver, a unique hex driver that is more than ordinary and features an impressive array of tools that defiantly make a complete package with the new CRKT tools. 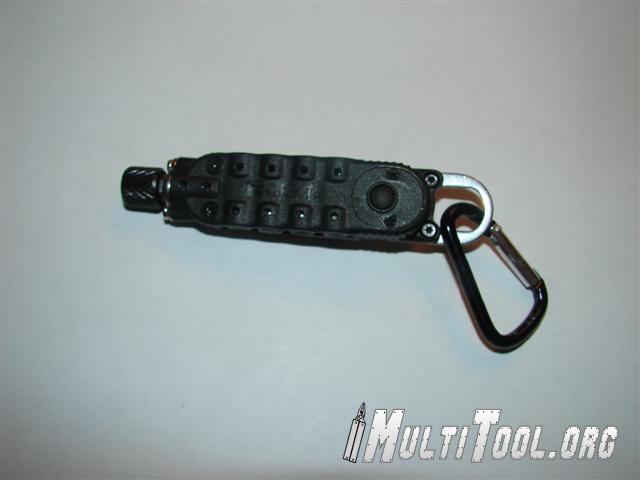 Small, yet deceptively versatile, the Get-A-Way Driver works well by itself or with other tools 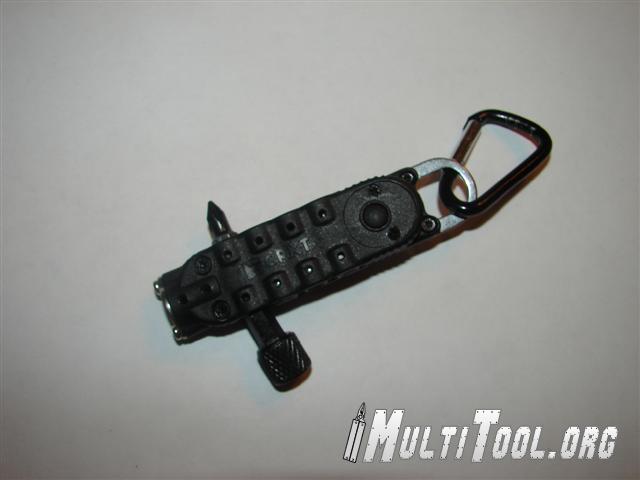 The Bit Adaptor has many functions, the least of which is popping screwdriver bits out!

So CRKT releases a new hex driver. What exactly does this tool sport that makes it so darn nifty? Well to start off the driver has four hex bits (small and medium Phillips – small and medium Flat) that have a ball bearing in the side of them to help retain them without falling out during use. This is a major improvement considering the original tools did not have this feature and I felt the magnets that hold the bits in weren’t strong enough for my taste. The bits themselves are held in place within the body of the driver and ball detents that keep them tight so they won’t fall out. This is not a feature I have seen in use much but it’s definitely a welcomed advantage. The driver itself is normally used in the forward position, this is well enough for most screws you encounter. However if you need more torque you have the ability to pull out the hex driver and place it in the hex cut-out underneath the body of the tool. This allows the user to apply the torque necessary to loosen stubborn screws or even to ensure ones doesn’t wiggle loose. The removable hex head does have a flaw though; it’s not as tight as it could be. Either in the end of the driver or in the torque position the bit is loose and does not fit snugly. This poses a risk when the driver is hanging from your belt and you run the risk of losing the head to your driver. Not perfect and something that can be fixed in the next revision of this driver. 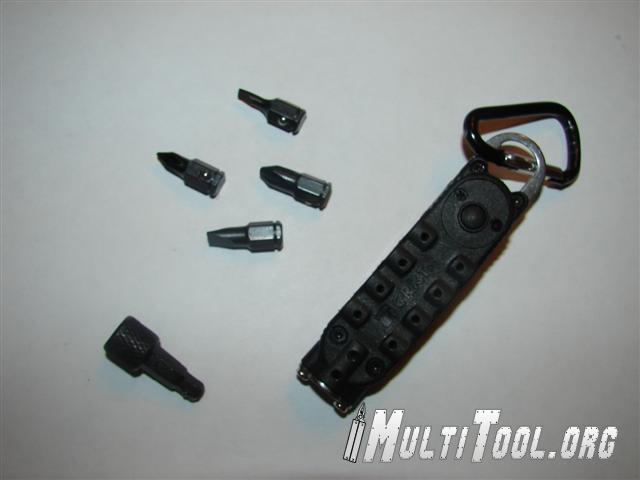 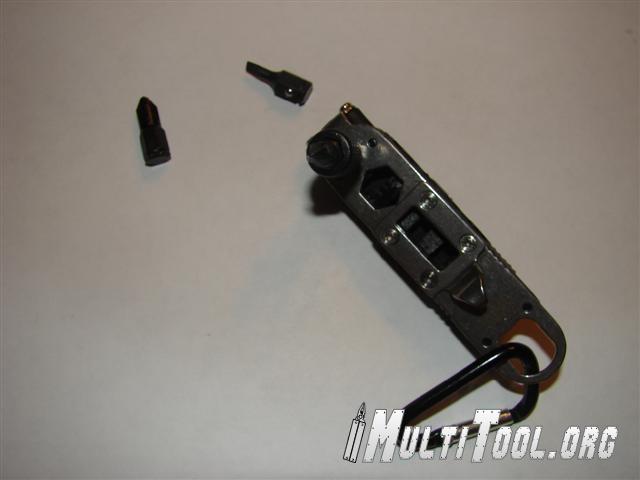 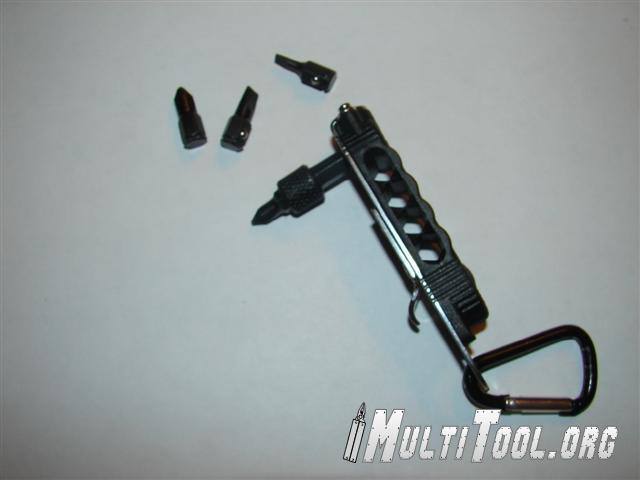 Some of the other features of the Get-A-Way Driver include an Oxygen wrench for those who work in the field and need such a device. There is a 10mm hex cutout as well but I have yet to find a use for this size. The end of the driver also has a bottle opener which works rather well on a variety of bottles and works better in my opinion than the one on the Guppy. The last tool included among the multitude of features is the LED light in the tail end by the bottle opener. The LED is quite bright and works by pressing a button on the top of the bit compartment. Like the Lumabiner is uses a Lithium battery and should work for a while before a replacement is necessary. I would have liked the option for the LED to face forward so when driving a screw or bolt in low level light I would have more visibility. This of course would run the risk of the LED being pressed while the driver is in use, even when not need. Not the best idea huh? Of course I can always dream. 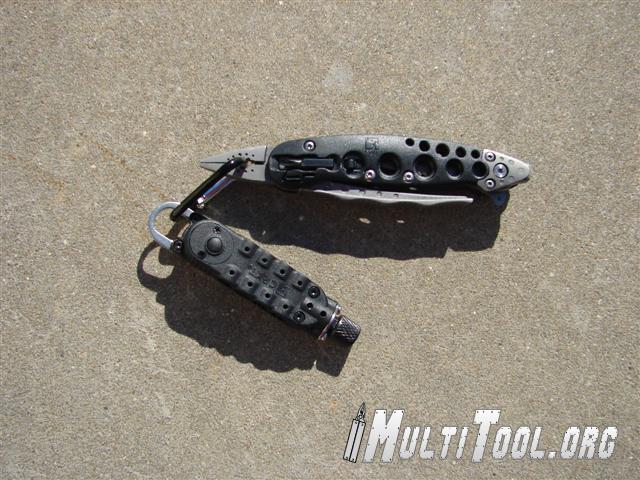 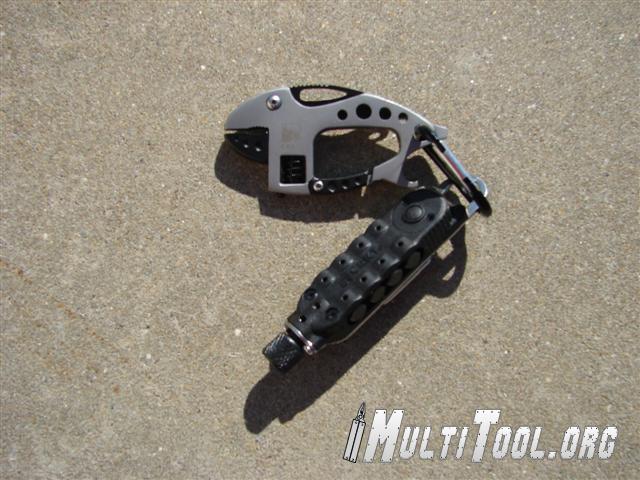 he last neat trick the Get-A-Way driver has in store is the ability to be attached to the ‘Lil Guppy and the Zilla Jr. This is achieved with the carabiner that comes attached to the end of the bottle opener, you simple clip the ‘biner to the body of the ‘Lil Guppy or in the Jaws of the Zilla Jr. and you have a powerful package to tackle most lite duty jobs. The tandem method is quite ingenious but only works well if you have deep pockets. The Get-A-Way Driver itself can be carried just about anyway you want, with the tools or just by itself. I keep the driver on a belt loop just hanging around via the included carabiner.

The Get-A-Way driver is a tool that is great being used by itself or with the other tools CRKT offers in its lineup. Later this year they are releasing a version of the driver that will have all the torx bits necessary to fix your I.D.Works tools if they need adjusting. There truly is something for everyone with the tools at CRKT. Check ‘em out.

More in this category: « CRKT Lumabiner Review CRKT Cicada Review »
back to top
Interested in this or a different tool and still have more questions?
Why not join us over on the Multitool.org Forum where our community can help you find what you're looking for!