Tool Logic is one of those companies that everyone has heard about, but no one seems to really know much about. This is a bit of a crime as ToolLogic has some excellent and innovative products, including the SLPro, Law Enforcement Model. In case you are wondering what qualifies the SLPro as a multitool, or at least worthy of being reviewed on a multitool site like this one, remember that the SLPro is more than just a one handed opening, locking tactical type knife.

The blade is the main feature of this tool, as everything else is built off the basic one handed opening, folding knife concept. One handed opening is achieved with a large oval hole, and the blade locks open with a substantial click from the frame lock. It also has a small thumb ramp at the rear of the blade, although I have yet been unable to figure out why- the ramp is inaccessible when the knife is opened due to the handle scales which overlap, and the flashlight head which is also in the way. Even when the flashlight is removed, the light housing and scales make any use of the thumb ramp impossible. I attempted to use the ramp as a catch to open the knife, but that only resulted in a small tear in my jeans. I have been forced to conclude that this small thumb ramp is for show only, which doesn’t make sense with the low visibility black coating on the blade. 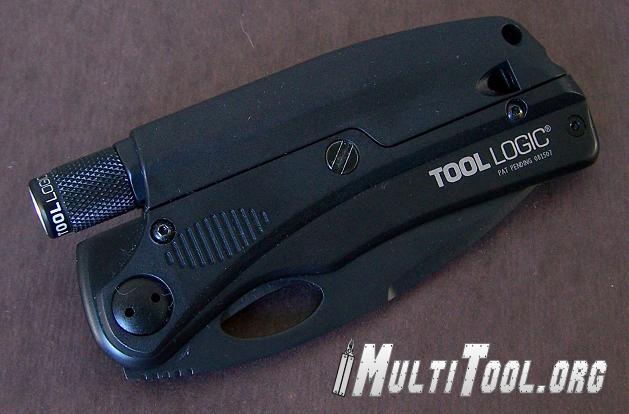 Other than that the blade itself has a partially serrated blade with a false edge running about 40% of the length of the spine. It isn’t a fancy steel, but it snaps open and closed securely and does the job, which is all I really want in a blade.

In addition to the blade, the SLPro also features a flashlight piggybacking along the back of the handle. While it may look and sound awkward, it actually isn’t- in fact, the light is integrated into the handle so well that you are only vaguely aware it’s there when using the knife for anything. The light by itself won’t turn anyone’s heads with it’s brightness, but is more than effective enough for most jobs, such as illuminating a path, a doorknob or a suspect’s face. The small LED is powered by four AG3 button cell batteries, and is activated by twisting the head. 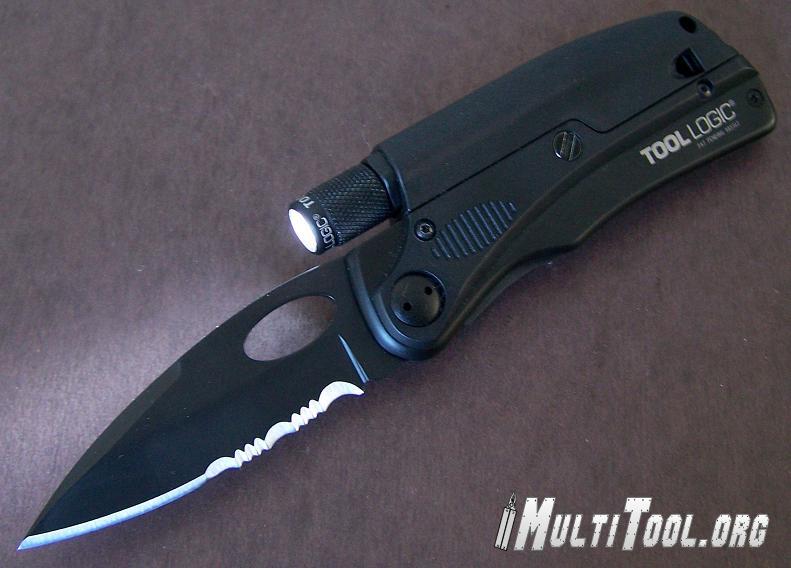 The batteries are a bit of a drawback on this light- the button cells run about $4 each locally, meaning it’s $16 to replace them when it dies. I stopped carrying CR123 powered lights because I felt the batteries were too expensive. In addition, the batteries are held together in a small rubber sleeve, which you have to keep to wrap the replacement batteries in. While I haven’t done it yet, it appears to be a colossal pain in the butt to extract and replace the batteries when it’s time. Fortunately they seem to hold up quite well, and I haven’t had to replace them in either of my Tool Logic lights yet. I wouldn’t mind seeing the shank of the cuff key shortened if it would mean the light could be modified to use AAA batteries.

A sharp tug on the flashlight head pulls it out of the body and exposes why this model is called the Law Enforcement version- there’s a handcuff key secured to the butt end of the light, which also includes a post for enabling the secondary lock. The key works well enough in my Smith & Wesson M-100 duty cuffs, but the post, because of it’s position on the key near the light body cannot be used to engage slider style secondary locks like those found on the M-100’s I use. It should function well enough for use on hand cuffs that have a button style secondary lock mechanism, such a most Peerless and Hiatt models. 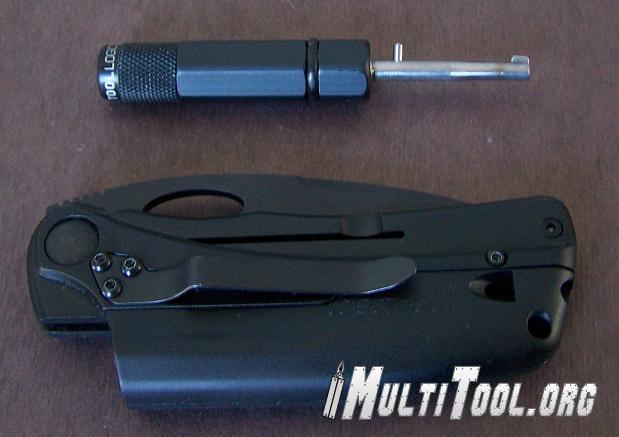 If you aren’t the type of person who carries or uses hand cuffs, there are a number of civilian versions of this knife which include more commonly used attachments on the flashlight. Checking the Tool Logic website shows that there are models with diamond sharpening sticks and fire steels for the outdoorsman. 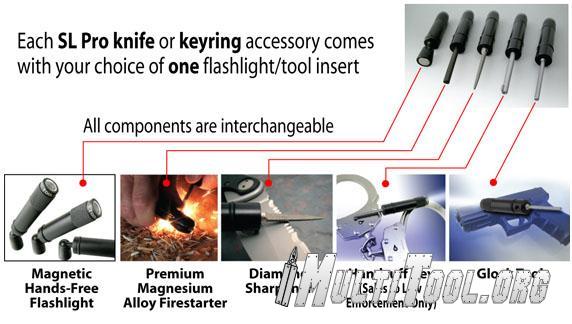 The SLPro also has a whistle molded into the butt of the handle that sounds as if you could call dogs and other help from ten miles away. It’s double chambered, which in layman’s terms means it’s LOUD!

Lastly, there’s a pocket clip, arranged for tip down carry for added safety, and also to allow quick access to the flashlight and handcuff key without having to draw the whole knife out. 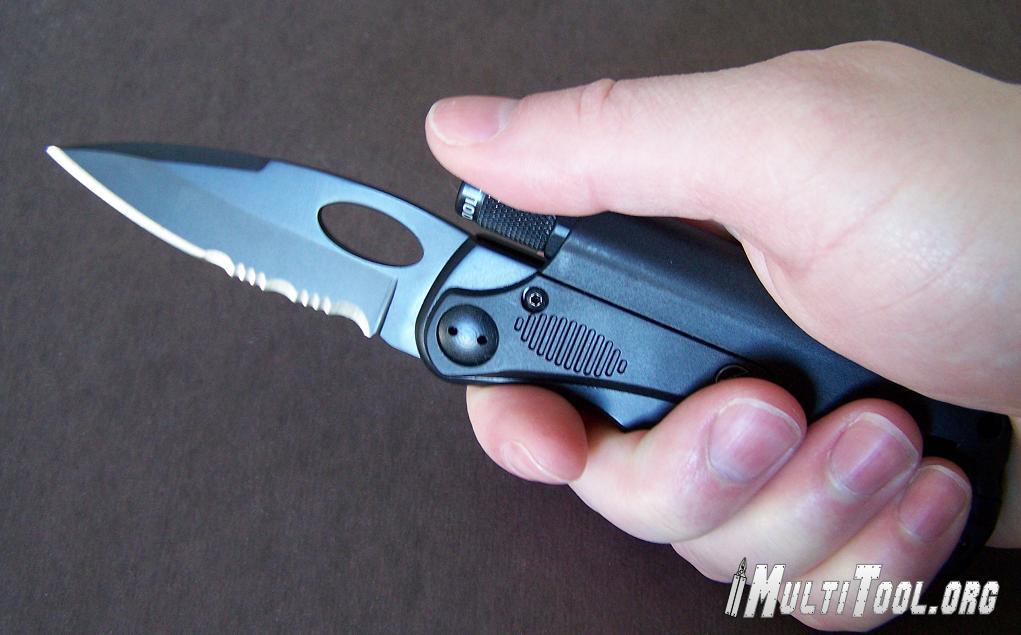 Overall the SLPro is a nice knife, well put together and decently designed. It’s not without it’s issues, like the thumb ramp, but nothing serious. And, at a suggested list price of around $50, it’s not a bad choice for any LEO- and the civilian versions would be equally as effective for the average person- just pick the model with the equipment you need and you are off. Additionally the flashlight and components are sold separately so you could get one knife and whichever extra inserts you may want or need.