Having never handled any Blackhawk tools or knives I wasn't sure what to expect when I ordered the HawkHook. At an MSRP of about $40, I figured it was worth a shot, and I'm glad I decided to. 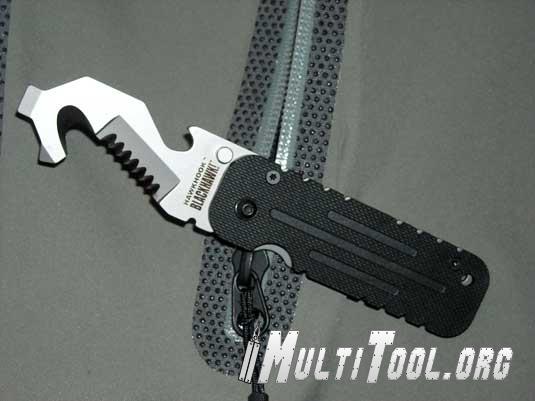 As of this writing I have yet to save anyone with it from a mangled car wreck, but I will say that this is indeed a decently made tool. In fact, it reminds me a lot of the Boker RESCOM designed by Chad Los Banos, not only because of the similar size and function, but also because it has a very similar design. While the RESCOM is based off a knife platform, the HawkHook is, at least as far as I've been able to tell, a standalone design, and incorporates a few added features over the RESCOM. 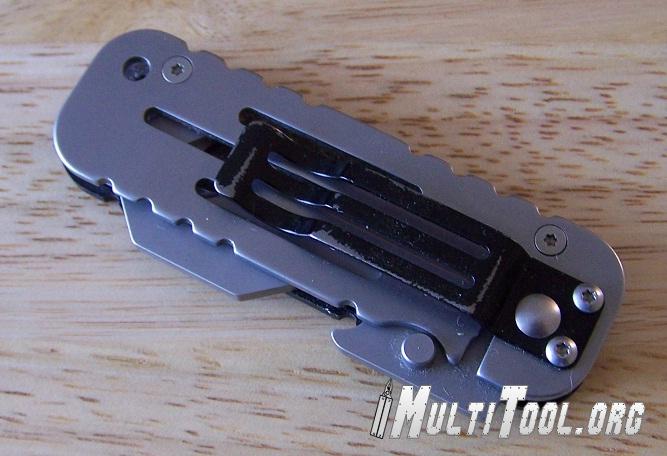 The HawkHook is basically a frame lock type folding knife, with what initially appears to be a g-10 handles scale on one side (further inspection reveals it to be a molded plastic) and a bead blasted steel frame on the other, with the integrated liner type lock and a skeletonized pocket clip. It's fairly small, but it locks up securely when opened with the ambidextrous thumb stud. Opening action is smooth and the blade makes a solid snap when locked into place- after hundreds of “flicks” I have yet to have a single instance where the blade didn't open entirely, and the lock didn't engage. Lefties may have a problem with the HawkHook, as the pocket clip can get in the way of the ambidextrous thumb stud, and there are no places to relocate the pocket clip to, although it can be removed altogether. I'd still like to see a couple of holes drilled and tapped on the opposite end of the handles to allow for different carry methods, and to move the pocket clip out of the way for left handed users. 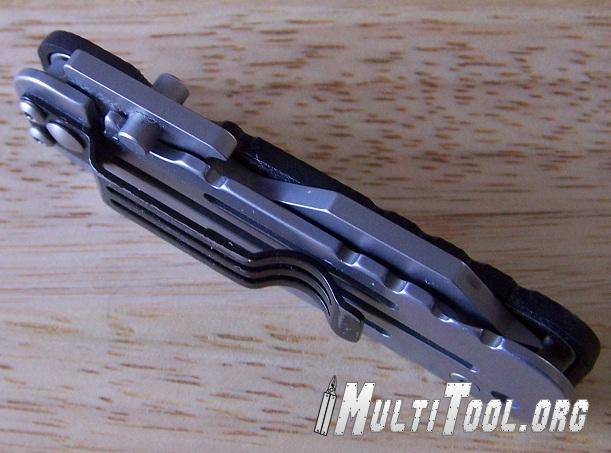 The blade on the HawkHook is AUS-8A which was a premium steel a few years ago, and while there are supposedly better steels out there, I have never had an issue with AUS-8A. It works well enough for any application I have used it for, and I see no reason to expect any problems with it here. Incorporated into the blade section is a hooked strap cutting edge, a serrated edge, flathead screwdriver, glass breaker, bottle opener, and what appears to be some kind of wire stripper notch. While I expect almost no functionality to the wire stripper, the other features seem well thought out.

I often wonder why all rescue type tools seem to incorporate a bottle opener. Is it a tip of the hat to rescue workers- a way for the manufacturers to “buy” them a drink as a thanks for the work they do? Or is it an insinuation that the stress of rescue work drives first responders to drink? Or, is it simple an easy tool to incorporate in pretty well any tool, and is a cheap way to add features without increasing cost? Whatever the reason, this bottle opener functions well enough, and that's really what's important. 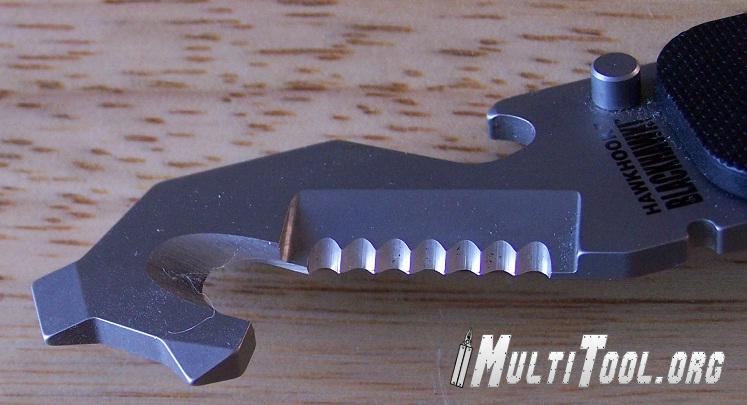 At the very tip of the HawkHook is a flathead screwdriver, which seems solid enough for light prying duties. I would consider it useful for only very light duties, as the pivot pin is not large enough to withstand any serious pressure, even though it appears that the blade could stand a more reasonable amount. If Blackhawk wants this to compete with other Rescue Tools on the market, I'd consider a pivot pin about twice the thickness of the current one. In a Rescue/Survival situation where one is relying on this tool, I doubt the user will be worried too much about the limitations and may end up breaking it at a very inopportune time. As a screwdriver, it seems a little wide. It is good for larger flathead screws, and has withstood the reasonable amount of torque I have subjected it to without any twisting or slippage. 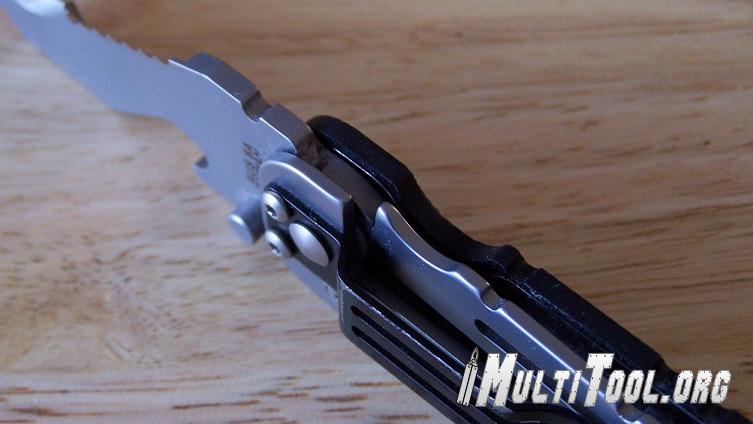 Glass breakers generally come in one of two types- the spring loaded glass breaker like the Benchmade Houdini or INOV8's ResQMe tool or an in-line point like the Victorinox Rescue Tool or the Utica/Kutmaster Rescue Knives. This is one of the places where the HawkHook stands out, as it actually incorporates a hammer style glass breaker. With many striker type glass breakers the user runs the risk of dangerous cuts to the hand and forarm as there's a significant chance they will come in contact with shards of glass, especially if too much force is used. The nice thing about a hammer style is that it takes the user's hands out of the direct line of force that is being used to shatter the glass. Usually however the hammer style has some weight in the head so that the force is transferred to the glass on the point of impact, but the HawkHook has very little weight to transfer and as a result may not be as effective. I will have to perform further tests to determine how functional this ability actually is. 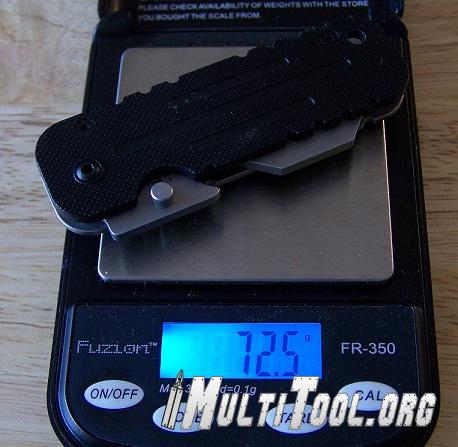 As with the RESCOM, the HawkHook uses a serrated blade leading into the belt cutting hook as a combination type cutter. Each has the ability to perform on it's own, but when used together they make a very effective belt cutting team. The serrated edge bites into the belt and leads the edges into the hook which finishes it off. This is a very effective system that I would like to see on more tools in the future.

The Bottom Line for the HawkHook is this- if you are a paremedic/EMT/firefighter/police officer or other first responder type of professional, you likely have other, better tools available to you. If that's the case, then you don't need the HawkHook, although I usually prefer to have my own tools handy in addition to issue equipment. You never suffer from having too many options. The real value to a tool like the HawkHook is to the individual, especially if you spend any significant amount of time driving or around any kind of heavy equipment, as having a tool handy- any tool really, but especially one designed as a rescue tool- can literally make the difference between life and death. As an EDC type tool however, the HawkHook isn't recommended as it's actual use in day to day tasks is quite limited. It isn't designed for that though, so that should come as no surprise. My suggestion for the HawkHook is to get it and clip it to the sun visor of your car and forget about it until you need it. 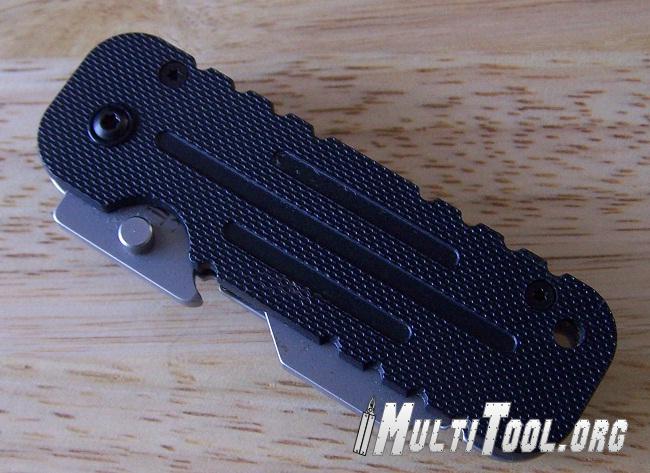 More in this category: « Swiss-Tech Screwzall Review Bear & Son Mini Bear Jaws Review »
back to top
Interested in this or a different tool and still have more questions?
Why not join us over on the Multitool.org Forum where our community can help you find what you're looking for!