Form should follow function in a tool, and yet “pretty” tools seem to sell better. Gerber took that to heart when designing the Strata- it is certainly pretty enough to sit alongside Gerbers fashion models like the Suspension and Resolve, and yet it's tough enough to have a place on any handyman's belt. Even I dismissed this one initially, as it seems a bit fancy at first look, but given how many times I've been wrong before, I decided to give this one a closer look. The folks at www.RockyNational.com were only too happy to help me out. 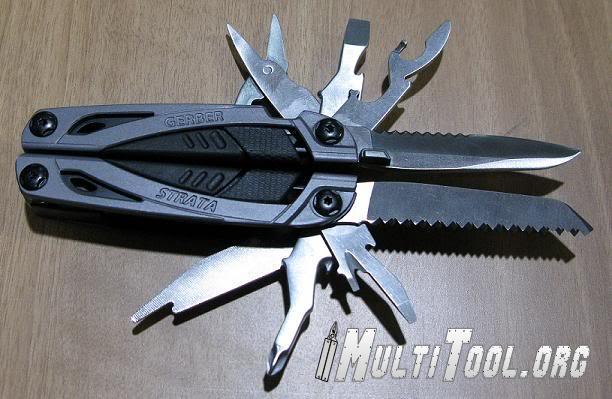 The Strata is actually a very impressive tool. It forgoes Gerber's traditional sliding head type pliers for butterfly opening pliers. Once unfolded, the pliers are sprung so the jaws open by themselves, which takes some getting used to, but saves a lot of fatigue during use. A good idea, and is usually for some reason only available on cheaper, lower quality tools.

As with almost all multitools, the Strata also includes wire cutters, only in the Strata's case they are anvil style, replaceable carbide cutters. I don't think better cutters are available in a multitool, and this is one thing Gerber is famous for. I'd like to see this feature on more models, and indeed it's such an effective system that Leatherman adopted a similar system in the SuperTool 300 and MUT tools.

Tools on the Strata are accessible from the outside, meaning you don't have to open the pliers to get at them. Additionally, all tools lock open, and include the typical Gerber lock systems which raises the tools out of the handle to allow easier access to them. Unlike the lock tabs on many other Gerber models, the ones on the Strata do not protrude, but are cunningly incorporated into the overall design of the handles. This is a nice feature, but I would like to see some more aggressive grip pattern on them, as they are very stiff and sometimes difficult to disengage, and almost impossible if you are wearing gloves or your hands are wet.

Most of the implements are typical Gerber fare- the scissors for example are Fiskars type scissors, which is only natural since Fiskars owns Gerber. The bottle opener and can opener work well enough, although won't be replacing pull top cans or twist off caps any time soon. Most notably are the tools on the second handle- the phillips is a full phillips, not the flattened version that folks seem to greatly dislike, and the small screwdriver/clam pack opening tool is brilliant- a solution to a problem that is a lot more prevalent than folks seem to think, and is likely going to be seen on a lot more tools in the future.

The saw is a bit on the short side, but good enough in a pinch- I prefer a longer saw, but if I'm planning to need a saw, I'll bring a dedicated one with me. The file is a bit of an odd shape- at first you think it's just a cost cutting measure to stick one in around the cutout for the plier head, but Gerber designers pointed out to us that it has been designed not only to fit in that space, but to also fit in smaller areas where most multitool files won't fit, which is why the texturing goes all the way to the very tip. Good thinking Gerber!

A quick word on the scissors- they are fantastic in use, but I don't care for scissors that need to be stored in the open position, and the Strata is a perfect example of why. With many designs, like that on the Leatherman Blast, the blades are contained inside the handles, so if they are folded improperly it's not as big a deal. With the Strata, the scissors need to be opened 180 degrees, then folded into the handle, but if the user isn't careful when doing it, there is a chance that the tip of one of the scissor blades can be left protruding from the handle, which could result in a decent cut to your hand or fingers the next time you pick it up. I found this out the hard way, but fortunately not too hard as I just got a small scratch. It's a minor concern that can be solved by paying a little bit of attention, but still worth noting.

The bottom line on the Strata is that it is a long time in coming, but it is done right- something Gerber has been working towards, but never got quite right until now. The Strata is a good looking and good quality multitool for someone who wants it all.

More in this category: « Gerber Octane Review Gerber Curve Review »
back to top
Interested in this or a different tool and still have more questions?
Why not join us over on the Multitool.org Forum where our community can help you find what you're looking for!